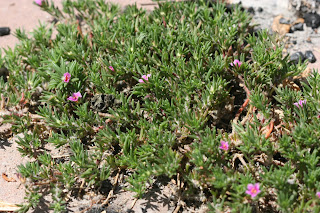 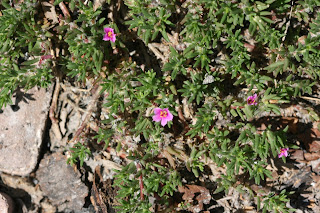 The moss rose genus includes a very popular cultivated plant that is used nearly everywhere in the landscape or as a short-lived flowering plant in pots. There are a few other nonnatives that have escaped into Florida's natural areas, but the diminutive pink purslane (Portulaca pilosa) is a native. Pink purslane is an annual or short-lived perennial that occurs statewide in Florida, most commonly as a lawn weed. It also occurs throughout all the states of the mid- to Deep South. The photos above were taken in my Pasco County lawn at the end of March. In my landscape, it forms a ground cover that slowly spreads outwards over time; eventually forming a mat a foot or more across. It is a self-seeder as well and so it shows up throughout my lawn.
Pink purslane can be distinguished from the common nonnative lawn weed, Paraguayan purslane (P. amilis) by its much smaller stature and rounded foliage. Unlike the latter which has flat leaves, pink purslane has rounded cylindrical foliage. Flowering occurs year round where I live and during much of the frost-free months further north. The flowers are less than 1/3-inch across and deep pink in color. They tend to close by midday. It is visited by small pollinators, such as some of the grass skippers.
This is not a plant to be propagated by any of the nurseries affiliated with FANN - the Florida Association of Native Nurseries as it is almost ubiquitous in its distribution already and does not need to be added to most landscapes. Nevertheless, it is an attractive and useful ground cover in a lawn and I leave mine alone because of that. I do, however, weed out the nonnative species.