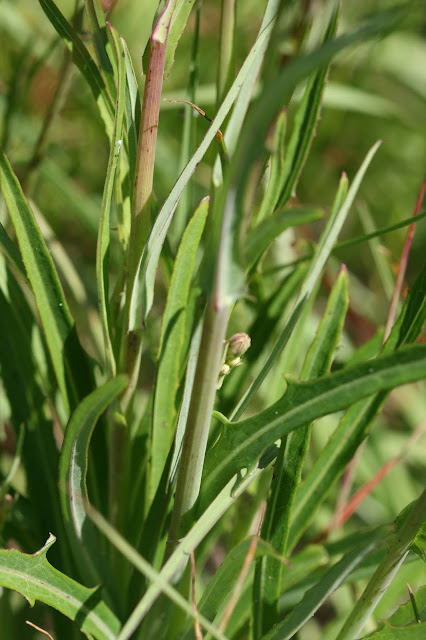 Woodland lettuce (Lactuca floridana) is an annual or biennial native to disturbed somewhat shady moist habitats throughout most of Florida. It is also widespread across much of the eastern and central US, as well as the Canadian provinces of Ontario and Manitoba.  Though widespread here in Florida, this species and its close relatives are rarely included in wildflower guide books. Why that is so seems a mystery to me.

Lactuca is the genus that includes the edible lettuces of our salads, but the leaves of this species are bitter and are best eaten only after a thorough soaking in water for some time. The genus name is derived from the milky sap produced by most of this genus and woodland lettuce is no exception.  When in doubt as to whether this is actually wild lettuce, pick a piece off of a leaf and look for the white sticky sap that will emerge.

This species emerges from the seed bank in early spring and grows quickly to a mature height of about 4-6 feet. Deeply-lobed, pinnately veined, lanceolate to triangular, dandelion-like, basal leaves (to 3-10” long and 1-4” wide) have pointed tips, toothed margins and tapered bases. Smaller upper leaves are lanceolate. Leafy purplish stems to 7’ tall rise from the basal clump in spring topped by large branching inflorescences of pale blue flowers (hence the other common name of Florida blue lettuce) which bloom, only several at a time, from July to October. Each inflorescence is in the form of a loose panicle of 11-17 flowers (each to 1/2” across) featuring small, petal-like, pale blue (sometimes close to white) rays with no center disks. Flowers give way to flattened short-beaked achenes featuring white fluffy bristles (pappus).

Woodland lettuce is not likely to ever be purposely grown as an ornamental by any of the native plant nurseries due to its short-lived nature and limited aesthetics. The small attractive compound flowers are visited by pollinators, however, and the greens can be used in much the same way that dandelions (Taraxacum officinale) are further north. If you desire this plant in your landscape, it is easily grown from seed. Plant it in partial shade in a location that retains some moisture.