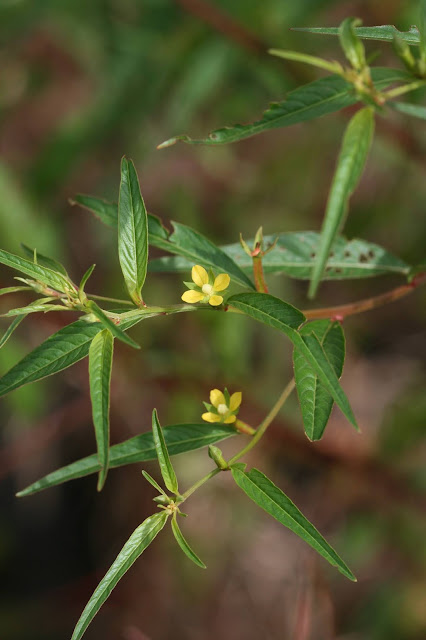 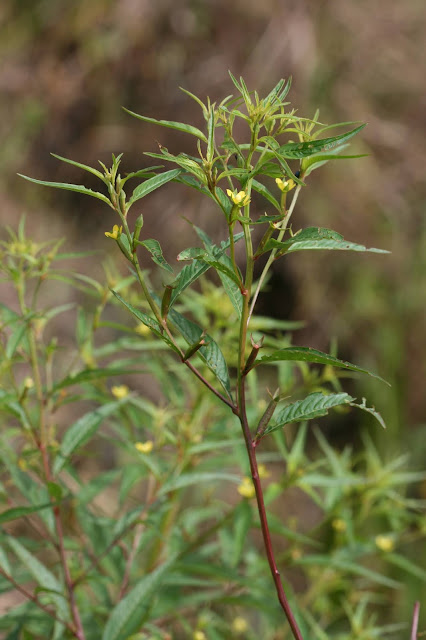 Jerba de Jicotea (Ludwigia erecta) is an annual member of this diverse genus and often considered to be a weed throughout its very cosmopolitan distribution.  It is found nearly statewide in Florida in sunny wet habitats and has a very limited distribution in Mississippi and east Texas.  It also is native throughout the Caribbean, central America and South America. It has been introduced in Africa and is considered to be a pest there. As its Latin name suggests, this is a tall upright species, reaching an adult height of 9 feet at times.  The tall thin stems are reddish in color and multi-branched.  The elliptical leaves are deeply veined and several inches long.  They are alternate on the stems.

Like the vast majority of species in this genus, Jerba de Jicotea has lemon yellow flowers with four petals.  The flowers are solitary and sessile on the stem with petals that are about 1/4 inch long.  The seed capsules are narrow and 4-angled.  As other members of this genus, the blooms attract a variety of pollinators. Flowering occurs in most months.

Jerba de Jicotea is not a good choice for home landscapes as it is weedy and an annual with rather small flowers. It has not been propagated, to my knowledge, by any nursery affiliated by FANN - the Florida Association of Native Nurseries and is not likely to be in the future. Other perennial primrosewillows would make better choices, but it would be easily propagated by seed collected from its ripe capsules.

Posted by Hawthorn Hill at 6:17 AM