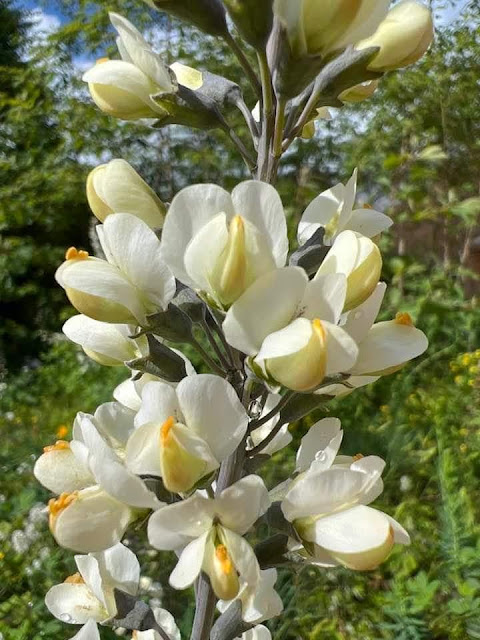 Thanks to Alan Weakley, I have this photo to share with you all.  Spiked wild indigo (Baptisia albescens) is another of the wonderful wild indigos native to Florida.  It is recorded from only five counties in the central Florida Panhandle, but also occurs in five states to our immediate north - Georgia, Alabama, the two Carolinas, and eastern Tennessee.  Like its close cousin, wild white indigo (B. alba), it is found in well-drained soils of woodland borders and open woods and is often found in dry woodlands, pine flatwoods, and roadsides. It is a perennial and is distinguished from its close cousin by its narrower leaflets (not shown here) and the yellowish color of its lower keeled fused petals.  The tree-parted leaflets are alternate on the stem and noticeably elliptical.

Spiked wild indigo is one of the smaller and bushier species of Baptisia and grows best in partial shade to full sun. It is known for being a tough, long-lived plant that tolerates a variety of conditions from drought, poor soil, dry soil, and erosion. It dies back to the ground each winter and reaches its mature height of about 2-4 feet by early summer.  It also has a mature width of about the same.  The flower stalks hold racemes of several dozen flowers.   These are mostly pollinated by bees.  Like other members of this genus, it serves as a host to the wild indigo duskywing skipper.

Baptisias are toxic if eaten so some care should be taken if planted in a landscape. All parts are mildly toxic and include symptoms such as nausea and diarrhea. False indigo may be propagated by cuttings or seeds. The plant has a deep taproot which makes it drought tolerant, but also difficult to transplant. The fruits are unlike other Baptisia species being cylindric, about 3 times as long as the diameter, and yellowish-brown (rather than black) when mature. It has a puffy bean pod. Fruits are ripe from July to October.

This is a species that I have never seen propagated by nurseries affiliated with FANN - the Florida Association of Native Plant Nurseries.  It may be possible to find it from native nurseries in other states where it occurs naturally.  For now, however, it seems best to simply admire it if chanced upon in its natural range.