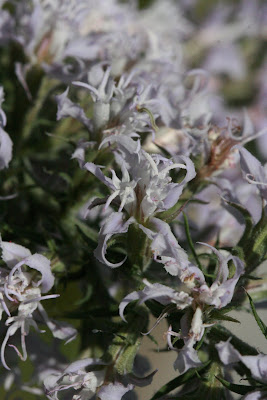 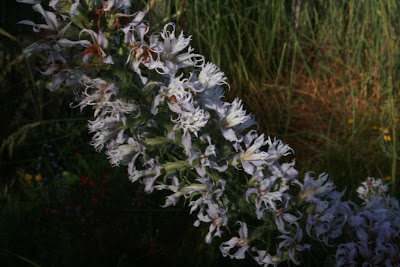 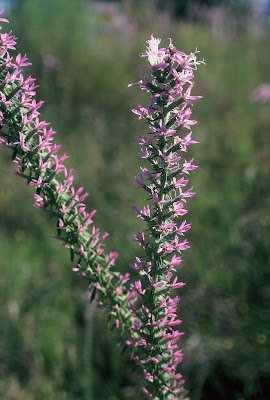 Elegant blazing star (Liatris elegans) is one of the most unique and beautiful of our 17 native Florida species. Found throughout much of the northern half of Florida, its national range includes most of the Southeast. But, despite this, it is not widely available in the trade and is only available by seed in Florida - except from Hawthorn Hill.

Elegant blazing star is tall and robust. At maturity, it may stand nearly 4 feet tall. Its flower stalk is thick and not as prone to falling over as some of our other tall species.

Like most Florida blazing stars, it is native to open habitats with well-drained soil. This includes sandhills, open roadside edges, and upland fields. I see it frequently growing with other blazing stars; especially graceful (L. gracilis), scrub (L. tenuifolia), and Chapman's blazing stars (L. chapmanii), and all four species work well together in a mixed wildflower planting.

What helps make this species so unique is the flowers. Unlike other species, elegant blazing star normally has white flowers inside each flower head, but these are surrounded by pinkish lavender bracts. This gives it its other common name: pinkscale blazing star.

A large number of buds are formed along the top one-third of the flower stalk, but they are spaced relatively far apart from each other and each contains less than a dozen flowers.

Once flowering ends, the seeds begin to ripen. Unlike other native species, the appendages at the back of the ripened seeds are feathery and quite distinct.

Hawthorn Hill is pleased to make this wonderful blazing star available to other wildflower enthusiasts. Our plants are grown from seed originally collected from Citrus County, near the southern edge of this species' natural range. This is a touchy plant to grow successfully, requiring good drainage to prosper. If you have these conditions, it is well worth adding to your landscape.
Posted by Hawthorn Hill at 8:59 AM