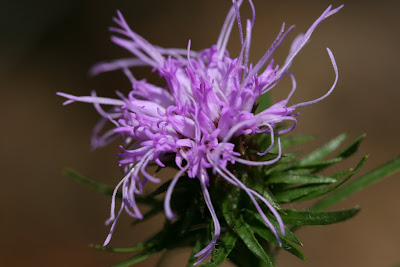 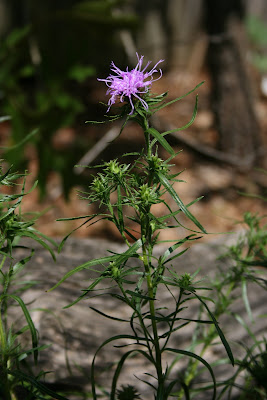 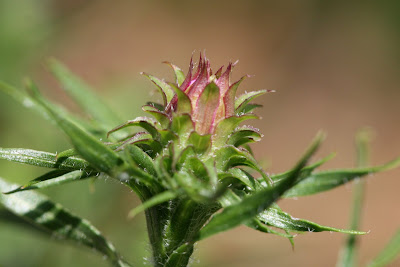 Scaly blazing star (Liatris squarrosa) is a rather rare component of Florida's native flora; ocurring in only 4 counties in the extreme northern part of the state. It is a rather widespread species elsewhere, however, and is found throughout much of the eastern half of the nation - except the most northern states.

Like many of our blazing stars, it occurs in upland sites where it has well-drained soils and plenty of sunshine. In Florida, this includes dry open woodland edges, calcareous openings, and open pinelands.

Scaly blazing star begins blooming in July (much earlier than most species in this genus) and is finished by August/September. Unlike most members of this genus, it rarely exceeds 2 feet in height and is often multi-stemmed. The flower buds are rather few per stem and include about 10-15 flowers each.

Despite this, scaly blazing star is quite showy when in bloom. Individual flowers are deep lavender in color and the flower buds are rather large. The common name is derived from the noticeable hooked scales that surround each bud - a feature that makes identification quite easy.

Scaly blazing star is sometimes offered by native nurseries outside of Florida and several of these are the source of Hawthorn Hill's plants. We have grown this species for 2 years in our Pinellas County landscape and we are selecting individuals adapted to our site from the seedlings we are growing from our source plants.

If you are a fan of blazing stars - as we are - this is a species well worth getting to know better. We anticipate having seedlings available in the spring of 2010. Please check with us after the first of the year to see how production is coming.
Posted by Hawthorn Hill at 9:33 AM