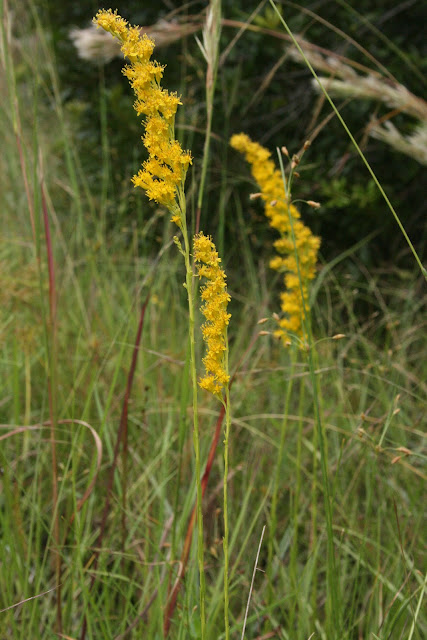 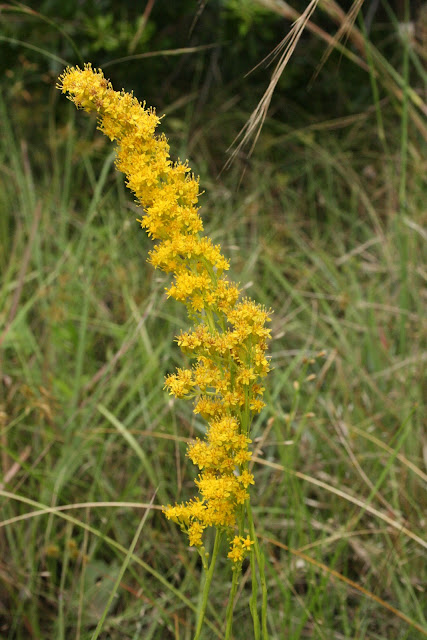 Wand goldenrod (Solidago stricta) occurs throughout Florida and much of the Southeast Coastal Plain in open sites with well-drained soils.  This is a common goldenrod, but goes largely unnoticed in most months because of its size and lack of dense foliage.
Like other goldenrods, wand goldenrod is deciduous.  In the spring, it produces a small cluster of linear leaves and then sends its thin stem upwards; eventually reaching a mature height of 2-4 feet.  This stem appears to be largely leafless as the tiny thin leaves are rather closely appressed against the stem.  Blooming occurs in the fall; October-November.  Unlike most species, the heads are linear and held close to the stem.  This gives the plants an appearance similar to the blazing stars (Liatris spp.).  Individual flowers are bright canary yellow; a bit brighter to my eye than many other goldenrods.
Wand goldenrod is only infrequently available from commercial nurseries, but one of the very best goldenrods for the home landscape.  Because of its size and growth form, it fits well into a mixed wildflower bed and makes its presence known only during the fall while it is in bloom.  At that time, it looks great mixed with other fall-blooming wildflowers - especially blazing stars, grassleaf goldenaster (Pityopsis graminifolia), and red salvia (Salvia coccinea).  Wand goldenrod suckers, but these can be easily weeded when necessary.  It also spreads by seeding.  Plant it in clusters of at least 3-5 individuals in the middle of a mixed wildflower planting.  It is adaptable to most soils and tolerates a bit of extra moisture better than many.
Posted by Hawthorn Hill at 6:34 AM