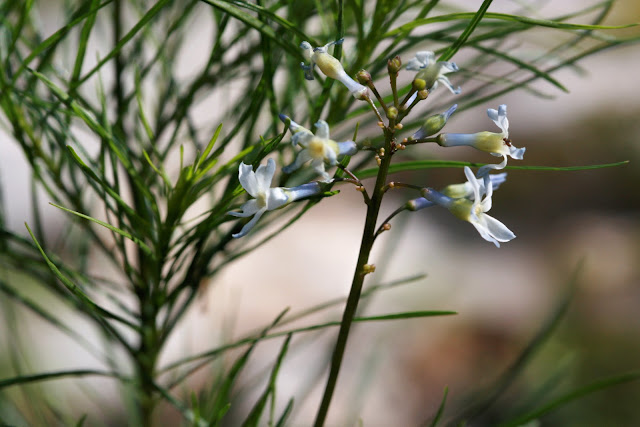 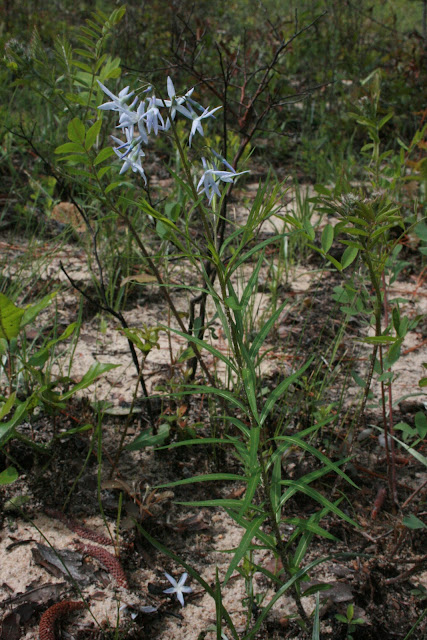 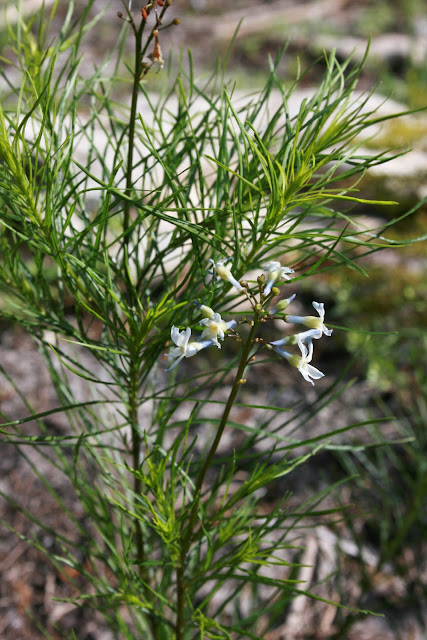 Fringed bluestar (Amsonia ciliata) is found throughout much of the northern half of Florida in open sandy habitats.  It also occurs in most states of the lower southeastern U.S., from Texas to North Carolina. It is a member of the same family as the milkweeds - Apocynaceae, but does not serve as a larval plant for any of the milkweed butterflies.
Bluestars (we have two native species) are deciduous and perennial.  They die completely back to the ground in early winter and re-emerge in mid spring.  They are not among the first to make their appearance, and when they do they look a bit like seedling pine trees, but with their needle-like leaves whorled a bit around the stem.
By late spring, they may stand as tall as two feet, but are often several inches less.  Several stems often arise from the stout underground "tuber".  The leaves are very thin (ciliate) and bright shiny green in color.  These are quite attractive. They clothe the stems all the way to the top.
Heads of 5-petal flowers are formed at the top of each stem in late spring - very late March to April in a normal Florida season.  These star-like flowers are pale blue to nearly white in color and approximately 1/2 inch across - with a narrow floral tube that produces nectar of interest to a number of pollinators and butterflies in particular.  Plants remain in bloom for several weeks.  After that, they remain rather inconspicuous in the landscape as mounds of feathery foliage.
Despite its rather extensive natural distribution and beauty, fringed bluestar is relatively poorly known in the nursery trade and has never been offered (to my knowledge) by anyone associated with AFNN - the Association of Florida Native Nurseries.  Hopefully, this will change someday as this beautiful wildflower has much to offer.  We have grown it in our Pinellas County landscape for many years now and have found it to be quite easy and undemanding.  Regrettably, we have not gotten seed to propagate more and it is on our "future" list at Hawthorn Hill.
If you locate a source for this species, plant it in high sunlight in sandy well-drained soils.  Because it is rather short, put it near the front of the planting bed and mass it in clusters of at least 3 per cluster.  It mixes well with other short sandhill species, such as the two species of greeneyes (Berlandiera spp.), downy phlox (Phlox pilosa), pink beardtongue (Penstemon australis), and the like.
Posted by Hawthorn Hill at 7:37 AM