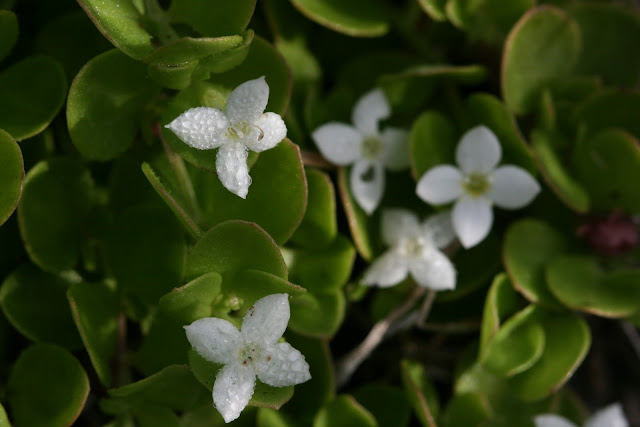 Its not difficult to see why this diminutive wildflower would be called "innocence" or why its Latin species name is "procumbens".  Its white flowers seem to exude an aura of "purity" while its growth form is flat to the ground.  Innocence (Houstonia procumbens) was formerly known as "Hedyotis procumbens", and most wildflower books will list it under its former name.  One of the vagaries of taxonomy is that names often change despite the inconvenience due to rigid rules imposed by an international taxonomy organization.  But, despite all that, the plant remains the same.
Innocence is found throughout Florida in moist open habitats; pinelands, prairies, and open fields. It is a plant of the Southeast and only occurs from Louisiana to South Carolina, nationally.  Throughout the major part of its range, however, it is rather common.
Innocence is a perennial that generally maintains its foliage through the winter months.  Its round, almost succulent looking leaves form a dense mat and the plants creep out across the ground, rooting periodically.  Well grown specimens may be more than 12 inches across, but stand no more than 1 inch tall.
Flowering can occur during any month from mid spring through fall.  The pure white flowers are produced in reasonably large numbers at the tips of the stems.  They are tubular in shape, but the tips flare into four petals.  These attract pollinators, but because they are held so low to the ground, most of the larger butterflies ignore them.
Innocence is easy to grow if given the right conditions.  It is not especially drought tolerant, so plant it in soil that routinely stays moist to wet.  It also does best in sunny locations.  If you have a marshy edge or a planting area at the upper edge of a pond, this wildflower would make an interesting addition.  Use it where it can be admired and be careful not to mix in other taller and more aggressive species.
I have never seen innocence offered by any of the nurseries affiliated with AFNN - the Association of Florida Native Nurseries and we do not propagate it here at Hawthorn Hill.  It can be grown from seed if you are willing to carefully collect a few of the small ripe seed capsules from a site where such collecting is permissable.  Germination will be enhanced if you cold-stratify the seed - put them in moist sand in a container and keep it in the refrigerator for several months.  Then scatter the sandy seed mixture onto a flat.
Innocence is a lovely wildflower that might be confused sometimes with various lawn weeds and other wildlfowers.  Just look for the distinctive foliage and the pure white tubular flowers with the flared petals.
Posted by Hawthorn Hill at 7:15 AM