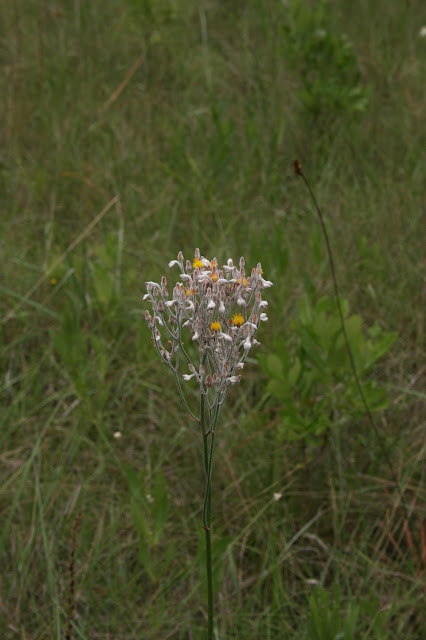 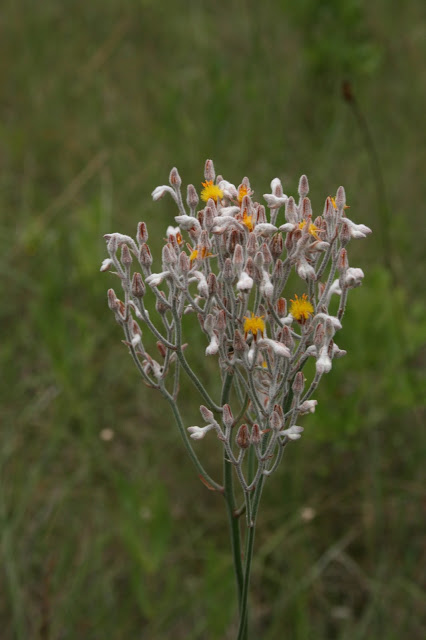 Goldencrest (Lophiola aurea) is an erect perennial herb native to the central and western portions of the Florida Panhandle. Originally included in the same genus as redroot (Lachnanthes caroliana) there are superficial resemblances between the two, but also significant differences. For one, goldencrest has whitish to brownish roots - not red, and there are also differences in their chemical and pollen structure. Goldencrest, therefore, has been put in its own genus and this is the only species worldwide. It is found throughout the Deep South with disjunct populations being reported from New Jersey and Prince Edward Island. Goldencrest is a species of wet savannas, bogs and ditches where it gets full sun and nearly constant wet soil.
It dies to the ground each winter, and reaches a mature height of 1-3 feet in late spring.  The leaves are small, linear, and less than 1/4 inch wide. Flower heads are produced at the top of the stalk. They are open cymes with the stems and the flower heads covered by white wooly hairs.  The individual flowers are tiny with a yellow crest emerging from the top of the bud. Each of these flower buds ripens to a dry capsule in late summer.
Goldencrest has never been offered for sale commercially in Florida, to the best of my knowledge.  It is a common plant of the open savannas of Apalachicola National Forest (where these photos were taken), in the same types of habitats where pitcher plants, sundews, and grass pink orchids occur. Look for it in late spring.