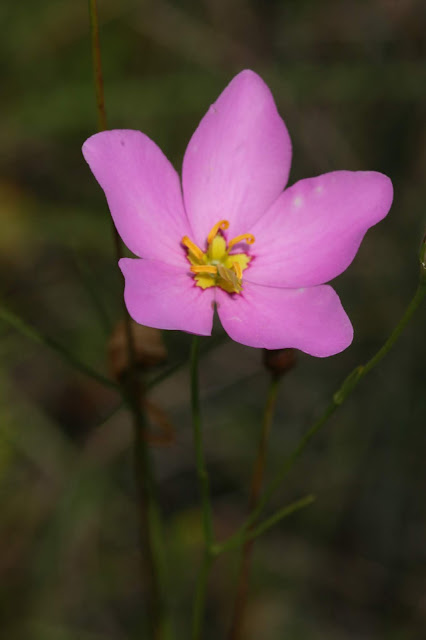 Meadow pinks (Sabatia spp.) are also called rosegentians - the problem with common names. Regardless, they comprise a large genus of native wildflowers native to wet and moist-soil habitats. Large-flowered meadow pink (S. grandiflora) is common throughout Florida at the upper edges of marshes and in moist flatwoods and prairies. It also is found in Georgia.
These are annuals. New seedlings emerge in the early spring and grow rapidly. Blooming occurs by summer and generally lasts well into fall before going to seed. As its names indicate, this species tends to be taller than most other members of this genus and the rich pink petals are often bit larger. They are generally a bit wider than 1 1/2 inches. Many members of this genus are somewhat similar in size and flower color, however, and this makes identification difficult for many in the field. To correctly identify this species, look for the upper leaves. In this species, they are thick, wrinkled and wider than the stem. The flowers are primarily pollinated by bees.
Meadow pinks make a stunning addition to many moist-soil habitats in Florida. It is nearly impossible not to encounter at least one species while in the field from summer through fall, but they are not often propagated because of the annual lifestyle. Seeds are produced in rounded capsules by fall to early winter. These can be scattered in wet meadow restoration projects and, once established, they should reseed and maintain themselves over time.
Posted by Hawthorn Hill at 2:50 PM