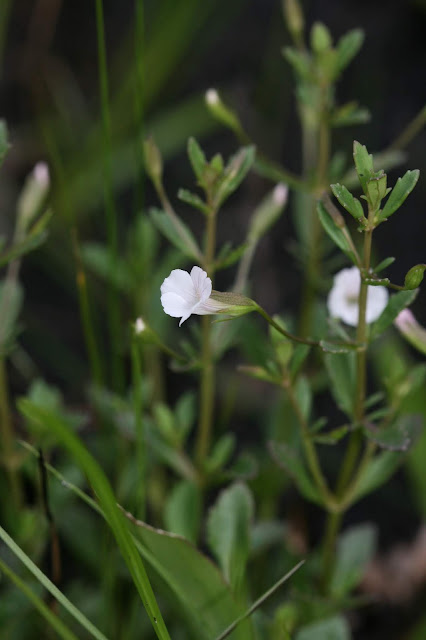 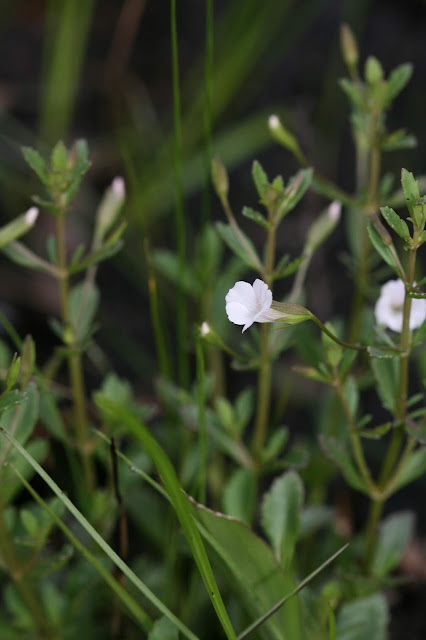 Peninsula axilflower (Mecardonia acuminata) is a very common wildflower in the understory of moist open habitats throughout Florida. The photos above reflect the subspecies P. acuminata subsp. peninsularis, which is a Florida endemic and found throughout much of central and south Florida. Other subspecies are found in Florida as well. Subspecies M. acuminata subsp. microphylla is a rare form vouchered only from Washington and Calhoun Counties in north Florida while subspecies M. acuminata subsp. acuminata is widespread in north-central and north Florida. The differences lie in the leaf shape and that is reflected in their various subspecies names. The species also is widespread throughout much of the eastern U.S.; its range extending from Texas to the west, north to Illinois, and east to Maryland.
This diminutive ground cover is easily overlooked by the casual hiker. It rarely stands more than 6 inches tall and grows mostly prostrate across the ground.  As such, it sends up multiple stems with dark green elliptical leaves. The subspecies photographed above, has noticeable teeth on the leaf margins. Each is about 1 inch long.  Peninsula axilflower is a perennial.
Flowering occurs from late spring to late fall.  The small tubular white flowers are produced near the tips of each stem and are horizontal to the plane of the ground below. Distinct purple lines are noticeable along the outside of the petals.  The flowers are about 1/2 inch in length.They seem to be of most interest to bees.
Peninsula axilflower, is almost ubiquitous to the edges of wet habitats in Florida, but it has never been propagated, to my knowledge, for wetland restoration projects by any of the native plant nurseries affiliated with FANN - the Florida Association of Native Nurseries. Perhaps it is simply not showy enough or too diminutive to warrant that kind of attention, but I always enjoy seeing it when hiking in its preferred habitats.

Posted by Hawthorn Hill at 8:58 AM