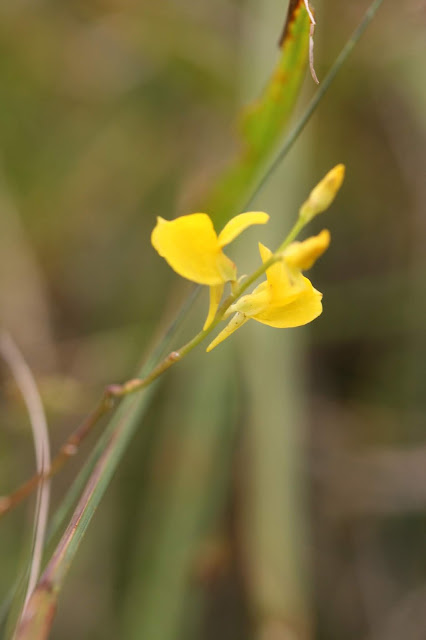 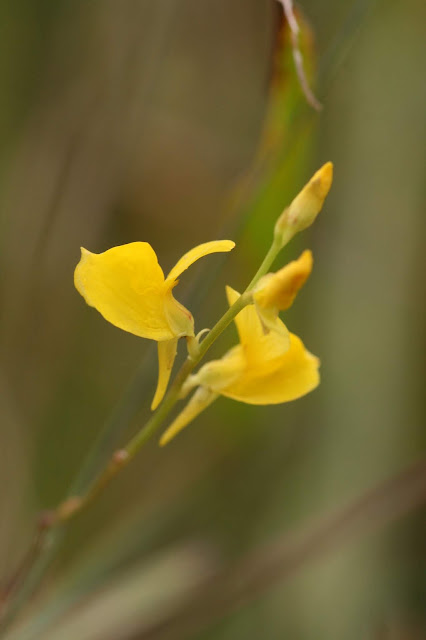 Southern badderwort (Utricularia juncea) is one of 14 native bladderworts found in Florida. A few of them have purple blooms, but the vast majority have yellow - like this species does. Identifying them can be a bit of a challenge and the first step I take is to see if the plant is firmly rooted in the substrate or floating in the water. The second step is to look closely at the size and shape of the flowers. Southern bladderwort is one of those that is rooted below the waterline and it's flowers are somewhere in the middle range of the overall group.
Southern bladderwort is common to most of Florida. It is found in inundated areas in most counties from the western Panhandle into extreme south Florida. It is not vouchered in many of the counties in between, but I suspect that's simply for lack of looking for it. Bladderworts are not especially noticeable when not in bloom. This species is also rather widespread in the US and has been reported along the Gulf Coast from Texas and then north to New York.
Bladderworts are semi-carnivorous. The tiny bladders that lie either just below the waterline or soil line have one of the fastest trigger mechanisms in the plant world and they use it to capture tiny invertebrates such as insects and nematodes. As its Latin name implies, southern bladderwort has small narrow leaves near the base. Its flower stalk arises from this center and stands up to 6 inches above. The bright yellow blooms are about 1/2 inch long and without the definite "hood" seen in a closely related species - U. cornuta.
Bladderworts are very interesting species, but not ones with a lot of horticulture significance. I have never seen any of our native species offered for sale commercially. Just appreciate them for what they are and look for them once the summer rainy season is underway in shallowly flooded open habitats.
Posted by Hawthorn Hill at 11:31 AM