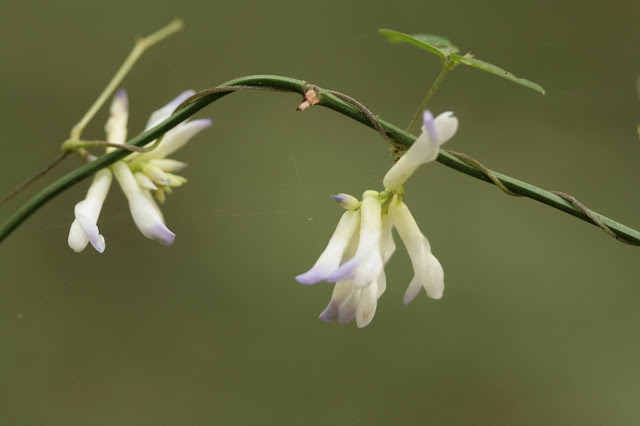 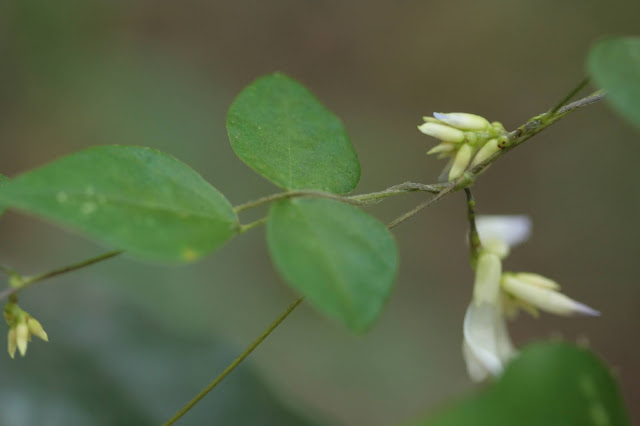 American hog-peanut (Amphicarpaea bracteata) is an annual twining vine native to a handful of counties in Florida, mostly along the Georgia border with populations also vouchered from Alachua and Citrus Counties a bit further south. The plants photographed above were observed in San Felasco Hammock Park in Alachua County, in moist semi-shaded conditions in the woodland understory. This species is more common further north and is reported from every state and province in the eastern two-thirds of North America.

This twining vine emerges in early spring and its thin stems grow outward for up to 6 feet from the main stem. The leaves are comprised of 3 leaflets, each oval in shape and about 1 inch in width. They are alternate along the stems.

Flowering occurs in late summer to early fall. These plants were photographed in late September. There are 2 kinds of flowers and each produces its own distinctive fruit. The flowers shown above are produced along the upper stems. They are composed of 3 fused petals that form a tube approximately 1 inch in length. The petals are white, but the upper two are tipped by light lavender or pink. They are attractive to a variety of bees and butterflies. Flowers also are produced near the base of the plant and these are without petals. The upper flowers produce narrow "beans" that are inedible while the lower ones produce a somewhat larger bean that is supposedly edible if boiled. Caution always should be taken before sampling wild plants.

American hog-peanut serves as a host plant for 2 skipper butterflies - the silver-spotted skipper and northern cloudywing.  Despite its potential value in a butterfly garden, its rambling nature and limited aesthetics have not lent it to being propagated by any of the nurseries affiliated with FANN - the Florida Association of Native Nurseries - or likely any of the native nurseries in states north of us.  it is to be admired simply as it is encountered.

Posted by Hawthorn Hill at 8:07 AM