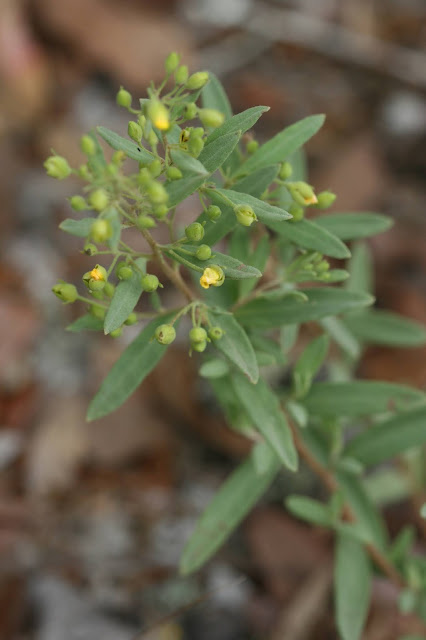 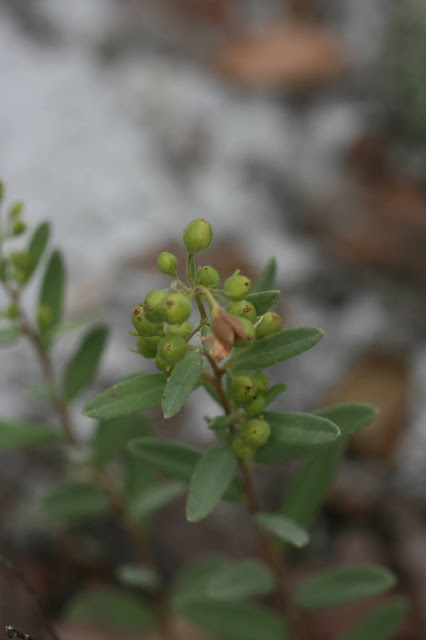 Florida scrub rockrose (Crocanthemum nashii) is a perennial wildflower native to much of peninsular Florida in xeric habitats - scrub and sandhill.  Like other members of this genus, its flowers open in the morning and close by early afternoon. As these photos were taken in mid-afternoon, the bright yellow petals have closed for the day. New ones will open the following morning. This is a near-endemic species with a disjunct population found in a small region of North Carolina - approximately 330 miles from the Florida border.
Florida scrub rockrose is the only member of this genus in Florida with two-valved seed capsules and with pubescent ovaries and capsules. It is a somewhat upright species that stands about 8-12 inches tall. The narrow, linear leaves are approximately 8 inches long and dull green in color. The bright yellow flowers occur mostly in spring until early summer and occur on the ends of the stems. They number up to eight in each cluster. It also commonly produces cleistogamous flowers several months later - flower buds that do not open, but are pollinated inside the bud.  At this time there can be up to 40 buds on the terminal stems. The flowers are mostly pollinated by small bees.
All of the species in this genus make attractive additions to the landscape, but are rarely offered commercially. I do not have this one in my landscape.  They require open sunny locations in well-drained soils.
Posted by Hawthorn Hill at 7:59 AM