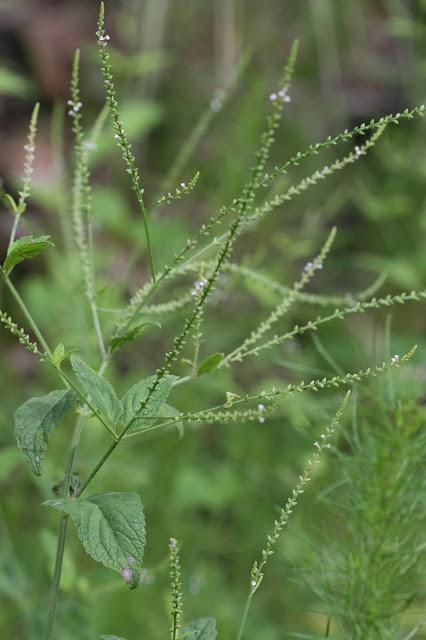 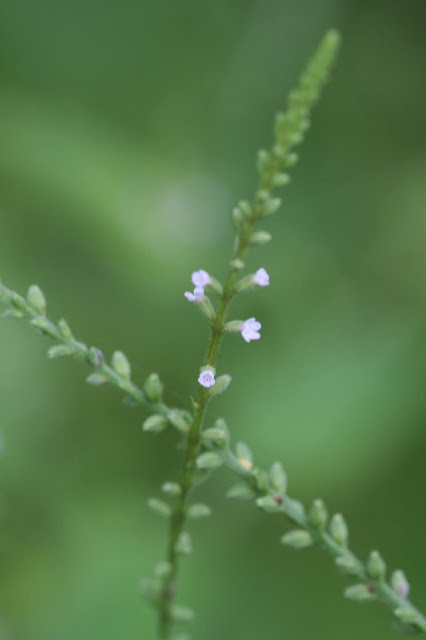 The true vervains (Verbena spp.) are a mixed lot of native and nonnative species in Florida, characterized by tall upright stems and small fragrant flowers that attract the attention of a wide variety of pollinators. Very few species in this genus are native to a broad range of peninsular Florida. Sandpaper vervain (V. scabra) is an exception as it is found nearly statewide in a variety of open and disturbed habitats. It also occurs throughout the lower 1/3rd of the US from California to Virginia. Throughout its range, it is found in moist to upland soils.

This is a perennial species that produces stiff thin upright stems that can reach 2-3 feet tall by summer. These stems produce multiple branches.  The leaves are oval with decided teeth along the margins. They often are alternate along the stems, but can be whorled. Each has a short petiole. As the common and Latin names imply, they are rough to the touch.

Flowering occurs in the summer on numerous branches at the top of each stem. They occur in pairs. Each flower is no more than 1/8 inch long and comprised of 4 partially fused petals. The flowers are pale lavender to nearly white in color. Like other members of this genus, they are relished by pollinators. On the day I took these photos (Okeechobee County in mid-June), they were being assiduously visited by queens - a butterfly that almost would seem too large for these diminutive blooms.

Sandpaper vervain is relatively weedy in appearance and not a likely candidate for commercial native plant nursery people.  It would make a good addition, however, to an open meadow-type pollinator garden where aesthetics are less important than function. Give it full to part sun and seasonally moist soil.