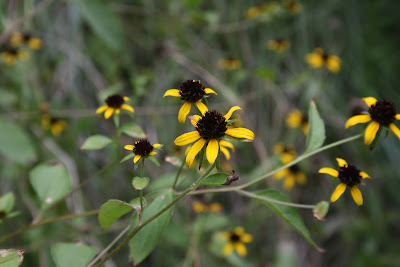 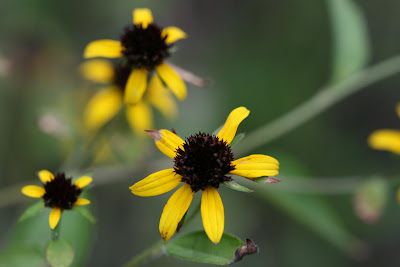 Brown-eyed susan (Rudbeckia triloba) is the daintiest member of this common wildflower genus and the rarest in Florida. It is reported from only 4 counties in the state; three in the central panhandle and from Levy County in the northwestern peninsula. It is listed as a state endangered species. Like many other wildflower species relatively rare in Florida because we are at the southern edge of their range, brown-eyed susan is common to our north and is found in nearly every state east of the Mississippi River and Canadian province from Ontario east to the Atlantic.
Named for its leaves, which are often three-lobed, brown-eyed susan is an annual (or very short-lived perennial) that reseeds itself when grown in the proper conditions. Therefore, it is extremely important to use this plant in areas where it will thrive and where the mulch is not too thick to allow the seed to contact the soil. Of course, you can always collect the seed each year and grow it in flats before transplanting it back to your garden, but this takes a lot of extra work.
This species in Florida requires a bit of extra moisture and a bit of protection from the full sun. Although we have found it to be very forgiving of growing conditions, it is not as drought tolerant as the common black-eyed susan (R. hirta) and needs to be watered during periods of extremely low rainfall. It does not seem to be particularly sensitive to soils and I suspect it will thrive in most conditions here except the poorest sands.
Brown-eyed susan appears in the spring with its distinctive lobed leaves and develops quickly. It is a somewhat delicate looking species and eventually reaches 2-3 feet in height - although it grows much taller in states to our north. Our plants that have grown from reseeding bloom in early September, but plants we have purchased from other growers develop and flower much earlier.
The flowers of this species are typical of the genus, but quite small - rarely more than 3/4-inch in diameter. What this plant lacks in flower size, however, is made up in numbers of blooms. Well-grown specimens will have well over a dozen flowers open at any one time and flowering occurs for well over a month in duration.
We enjoy this species and try to keep it in our Pinellas County garden, but don't intend to propagate it as part of our nursery. Thankfully, others do and it is not difficult to find this wonderful wildflower from other native plant nuseries.
Posted by Hawthorn Hill at 4:07 PM