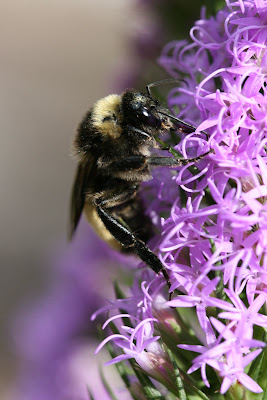 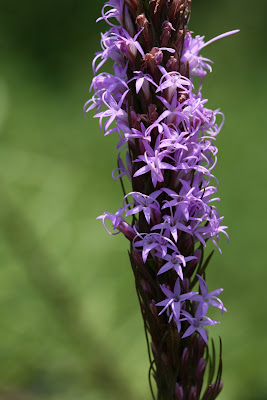 Chapman's blazing star (Liatris chapmanii) is a species common to upland habitats throughout Florida. Found primarily in sandhill and scrub, it is very adaptable as long as the soils are well drained.
Chapman's blazing star is easily recognized from others in this genus. The needle-like leaves are curved upwards toward the flower stalk and partially cover the developing buds. Unlike many other blazing stars, the leaves are prominent nearly to the tip of the flower stalk and the buds are held close to it. This makes the bloom spike appear quite dense.
Chapman's blazing star is somewhat variable in size. In extremely poor soils, it is rarely taller than 2-3 feet, but in better soils, it may stand as tall as 4-5 feet. When it reaches these heights, it is prone to falling over; especially when grown in the open conditions it favors.
Blooming occurs a bit earlier than most other members of this genus. Most specimens begin in late August to very early September and are finished before October arrives. The blooms are especially attractive to a wide variety of pollinators, including bees and butterflies and the rich lavender color is aesthetically interesting.
We have grown Chapman's blazing star in our wildlfower gardens for many years and have found it to be one of the easiest species to maintain. Give it plenty of sun and deep sandy soils and it will thrive. Plant this specimen in clumps and place it in the middle of the planting. If your soils are more fertile than pure scrub sand, place it near some other plants to give it structure and to help keep it from falling over.

Posted by Hawthorn Hill at 4:23 PM