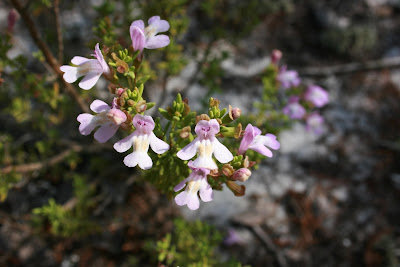 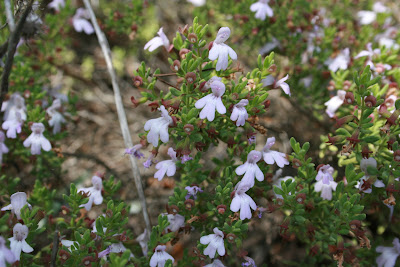 Ashe's savory (Calamintha ashei) is a rather rare Florida endemic (it is listed by the state as a Threatened species), found mostly in Polk and Highlands County in the Lake Wales Ridge. There is a disjunct, small population in a portion of the Ocala National Forest in Marion County. In all locations, it is restricted to excessively well-drained sands and full sun.
Ashe's savory is a bit more sprawling than the other Florida species. Often, it is more wide than tall. Well-grown specimens rarely stand taller than 18 inches, but they may be 2-3 feet wide. The foliage is a beautiful blue-green in color and the leaves are rather elliptical and curl under quite noticeably.
This species is described as a perennial, but I have not found it to be especially long lived. Truly large woody specimens are rare in nature and most individuals are no older than 3-5 years by appearance. It seems to thrive in open and somewhat disturbed areas of the Florida scrub where its many seeds can find a place to germinate and get started without competition.
Ashe's savory blooms most abundantly in the spring. Very few flowers, if any, should be expected at other times. The flowers are especially striking; light lavender and a bit larger than either the Georgia calamint (C. georgiana) or the toothed savory (C. dentata) I have described previously. I will admit an extreme fondness for this plant and I try to make at least one trip each spring to places where I can see it in bloom. the flowers are especially attractive to bees, but butterflies can be see pollinating it too.
Because of its rarity and narrow tolerance to growing conditions, this is not a plant likely to be offered commercially; although it has been from time to time over the years. We have kept this plant in our gardens by creating the type of scrub conditions it requires in nature and we propagate it from time to time by cuttings. At this time, however, we do not anticipate offering it through Hawthorn Hill.
Posted by Hawthorn Hill at 8:52 AM