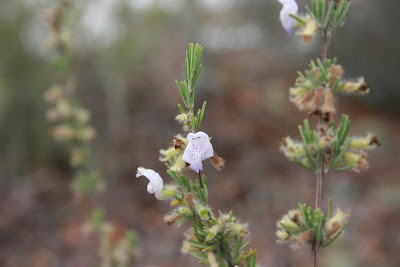 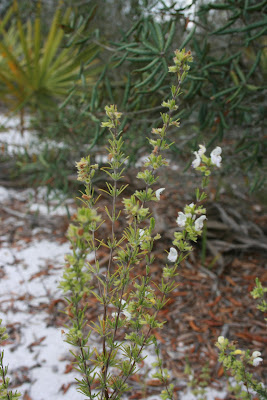 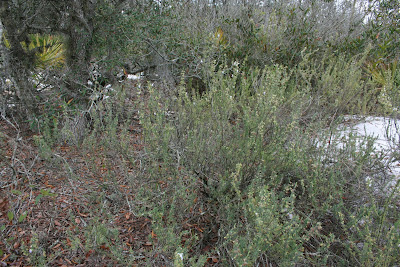 Until recently, all taxonomists seemed to believe that this was a distinctly separate species from the wild rosemary (C. canescens). Although they share some characteristics and were likely one species in a far distant past, their populations are separated by a great many miles with very little likelihood of genetic mixing. Short-leaved rosemary is restricted to 2 counties in central Florida and only found in the deep sands of the Lake Wales Ridge - itself an island of endemic plants. Wild rosemary is a species of coastal dune scrubs - and is never found too far inland. They seem to have fairly distinct growth habit differences and I have almost never found a short-leaved rosemary with a lower lip as richly lavender as that almost always found in its close relative. For those reasons, I side with those taxonomists that continue to argue for separate species status. I have grown both species for years and they are distinct...
Short-leaved rosemary is often far more sprawling than wild rosemary. Because of that, it is less attractive as a purely foliage garden plant than its near cousin, but it still maintains its wonderful evergreen nature. Blooming is most common in the spring, but it may produce flowers all the way until early winter - especially if a good rain or two arrives in the late fall.
Use this species as described for its close cousin. Because it may reach several feet in height and many feet across, however, it is best used in a more-central location than right next to a trail or edge of a planting bed. I also recommend giving it the exceptional drainage and sunny habitats found within its natural range in the Lake Wales Ridge. I have not had as easy success getting it established in my typical yard "sand" as I have with wild rosemary.

Posted by Hawthorn Hill at 2:18 PM