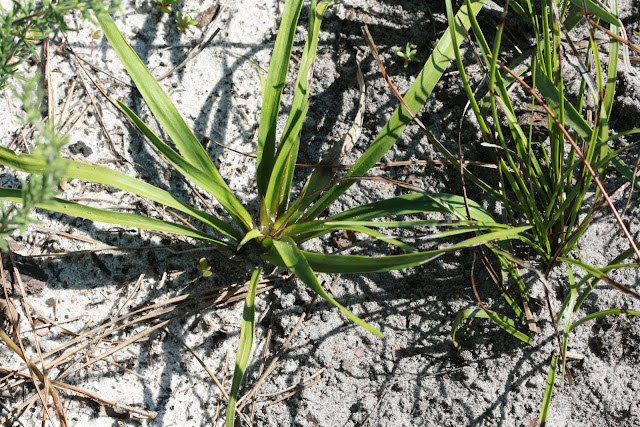 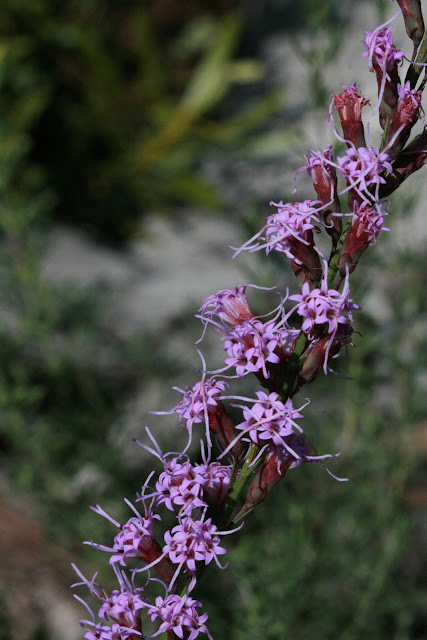 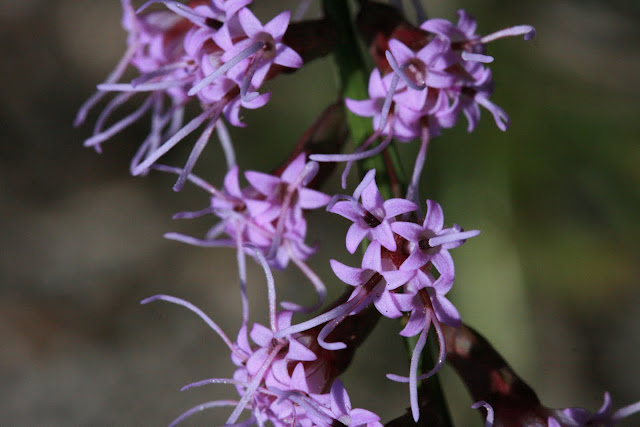 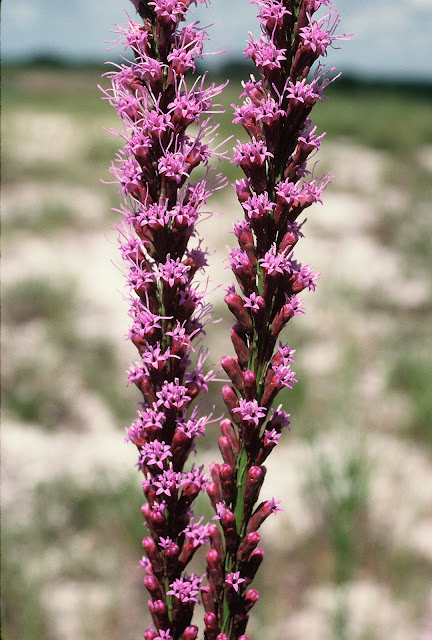 Clusterleaf blazing star (Liatris laevigata) is found nearly statewide in Florida and in portions of Georgia.  Like many other Florida blazing stars, this species occurs only in exceptionally well-drained sandy soils - conditions most commonly found in scrub and sandhill habitats.  Taxonomists sometimes combine this species as a variety of Liatris tenuifolia, but the two are quite distinct and seem to deserve separate species status.  Of the two, clusterleaf blazing star has the narrowest range in North America, but is more widely distributed in Florida.

The top photograph shows the difference in leaf form between L. laevigata and L. tenuifolia.  Clusterleaf blazing star is pictured on the left and has leaves that are decidedly wider and "coarser" than scrub blazing star.  Sometimes, these leaves persist through the winter, but most commonly they are deciduous.  In the early spring, they emerge and soon a dense basal rosette is formed.

Clusterleaf blazing star begins to send its flower stalk upward in mid-summer.  Eventually, it reaches 3-4 feet.  In our gardens at Hawthorn Hill where we grow both species side by side, clusterleaf blazing star's flower stalks tend to be several inches taller than scrub blazing star, the flower buds tend to be larger and held at more of an angle away from the stalk, and the flowers tend to be a bit larger.  As its sometimes-used Latin name implies (L. tenuifolia var. quadriflora), the buds often are composed of four flowers, but as the photographs above demonstrate, this is not always the case.  Flowering occurs in late fall - late October to early November.

Clusterleaf blazing star is showier than scrub blazing star, but it is not quite the same splash of color as many of our other species.  But, because it is often in bloom a bit later than the others, it is a wonderful way to extend the season.  Use this species in a mixed wildflower setting, but only in sites with exceptionally well-drained soils.  Cluster individual plants into groups of five or more and use them in the front half of the planting area.  I like to combine this species with Chapman's, graceful, elegant, and scrub blazing star as all of these species have similar growing requirements and often occur together in nature.

Clusterleaf blazing star is sometimes available from nurseries associated with AFNN, the Association of Florida Native Nurseries, but is often listed as L. tenuifolia.  Because of this, it may be necessary to ask further as to which "L. tenuifolia" is being offered.  Sometimes, they are even mixed together on the same bench and labeled similarly.

We have grown both species together in our landscape at Hawthorn Hill for years and they remain true and distinct.  And, I have never seen forms in the wild that were indistinct. For this reason, I have chosen to use the taxonomy that clearly separates them.  I suspect that someday, everyone else will do the same - but until that time, make sure you get what you ask for.