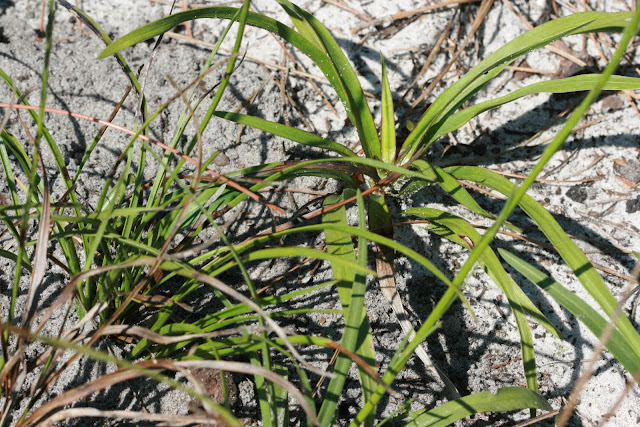 Scrub blazing star is found throughout much of Florida and in states immediately adjacent to us.  As its name implies, this is a species that occurs only in the most well-drained sandy soils of Florida's scrub community.  In these areas, it is relatively common and abundant.

Scrub blazing star is deciduous.  In the early spring, it sends out its extremely narrow leaves that resemble pine needles - or the leaves of wiregrass.  For much of the spring and early summer, it exists as a basal rosette of these needle-like leaves and is difficult to distinguish from all of the other plants surrounding it.  Then, in mid-summer, it begins the process of sending its wand-like flower stalk upward.

Scrub blazing star has an extremely narrow flower stalk and the small flower buds are held close to it.  Eventually, the stalk reaches a height of 2 1/2-4 feet.  Blooming occurs in late fall, usually a week or more later than other species, like L. chapmanii or L. ohlingerae, that may occur in the same area.  This is one of the least showy of our species.  The rich lavender flowers are attractive, but quite small.

Scrub blazing star requires exceptionally well-drained soil to prosper.  If these conditions can be provided, it makes a wonderful addition to a mixed wildflower planting.  Group five or more specimens together, 6 inches apart so the individual plants do not "get lost" and plant them near the front half of the planting area.  Mix it with other mid-sized to smaller late-fall blooming wildflowers such as grassleaf goldenaster (Pityopsis graminifolia).

Scrub blazing star is often available from nurseries associated with the Association of Florida Native Nurseries (AFNN).  We have grown it in our gardens at Hawthorn Hill from the beginning, but do not intend to propagate it ourselves.

Posted by Hawthorn Hill at 6:20 AM