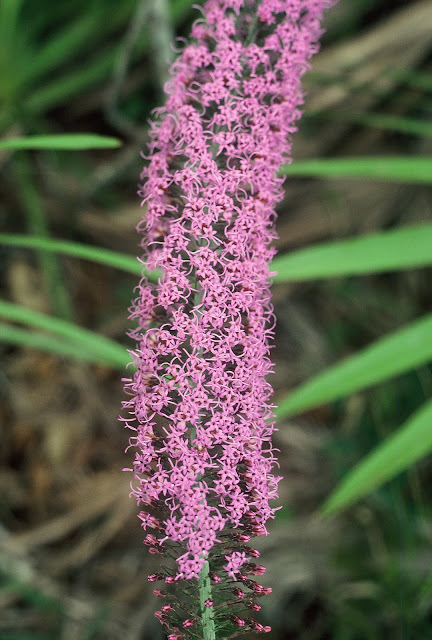 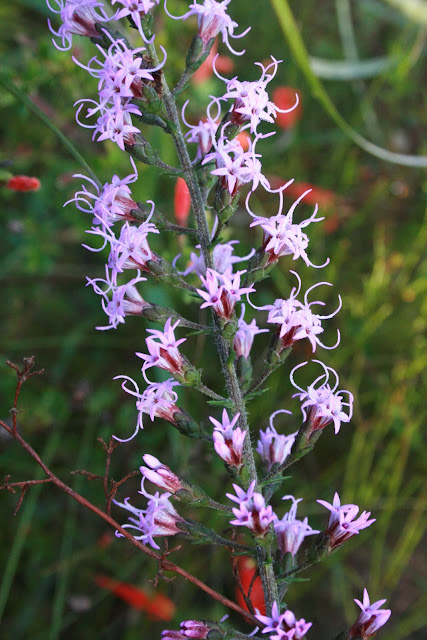 Graceful blazing star (Liatris gracilis) is one of the most widely distributed blazing stars in Florida and one of the easiest to maintain in a home landscape setting.  In Florida, it occurs in a wide variety of well-drained upland habitats including scrub, sandhill, flatwoods, and open deciduous woodlands.  This is a southern species and occurs outside Florida only in states in the Southeastern Coastal Plain.

Like other members of this genus, graceful blazing star is deciduous.  By early spring, the basal rosette of thin, whorled leaves are well established.  These leaves also are covered by noticeable hairs.  All parts of this species are "pilose" in this way.

Flowering occurs in the fall; generally October through early November.  The flower stalks are taller than most and often reach 4-5 feet.  Individual flowers are quite small, but the number of flower buds is quite numerous.  Each bud is held well away from the main flower stalk by distinct bud stalks - correctly known as pedicles.  Because of this, the flowering stalk during the peak of blooming is quite broad and showy.

Graceful blazing star is adaptable to a wider variety of landscape settings than most of Florida's species.  Though it is exceptionally drought tolerant, it will persist in areas that are seasonally more moist as long as this condition doesn't persist for too many days in succession.  Because of its adaptablity and widespread distribution, graceful blazing star is one of the most commonly available blazing stars commercially.  Use this species in a mixed wildflower setting, but use it towards the back of a planting area and mix it with species of wildlfowers and native grasses that can help to hold its tall flower stalk upright.  Of all of our native blazing stars, graceful blazing star is the most prone to falling over.  When this occurs, its flower stalk twists and meanders through the understory before turning upright once again.  Use a plant stake, avoid soils that are too rich, and plant it next to sturdier neighbors to help avoid this from occuring.

Posted by Hawthorn Hill at 7:56 AM