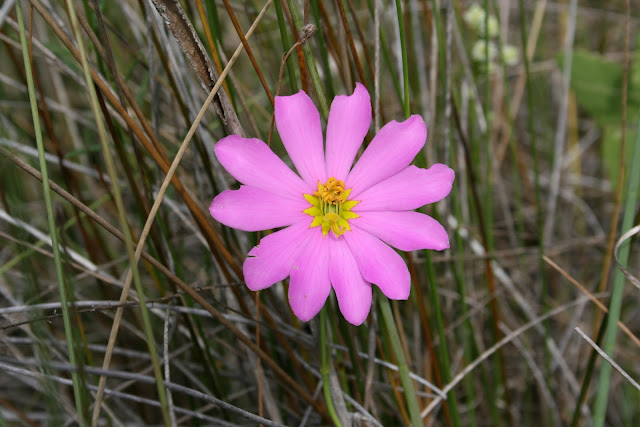 One of my very favorite marsh-pinks is named after William Bartram, one of the earliest of the Eurpopean botanists to explore and classify Florida's flora. Bartram's marsh-pink (Sabatia decandra) was formerly known as S. bartramii, but is now correctly named for its 10 petals - which in reality can vary from between 9 and 12 in number.  Bartram's rose-pink occurs throughout Florida in moist to wet soil habitats; primarily at the upper edges of open sunny marshes.  It is also native to our immediate neighbors and to the Carolinas as well.
Though sometimes described as a perennial, I have found it to be an annual.  It forms rather large, linear, almost succulent basal leaves in the early spring, but these largely disappear by the time the plants bloom in mid summer.  The flower stalks are robust and stand about 2 - 2 1/2 feet tall.  Small opposite leaves are present up the flower stalks.
What makes this species so showy are its vivid pink flowers, with its broad petals forming a corolla nearly 3 inches across.  Although a few white forms are encountered, most are similar to the photo above.  And, as common to the genus, the base of each petal has a canary yellow point outlined in red - forming a complex star pattern around the noticeable green ovary and the coiled stigma and style.
This species has never been offered for sale by any of the nurseries affiliated with AFNN - the Association of Florida Native Nurseries, and is not likely to be.  Although I have tried to maintain it in my marshy garden at Hawthorn Hill, I have not been successful.  I have accepted that this is one of the great many beautiful wildflowers meant mostly to be admired in the wild.  Look for it in open wet marshes and wet prairies during the summer months.  It is spectacular when growing in mass.
Posted by Hawthorn Hill at 8:33 AM