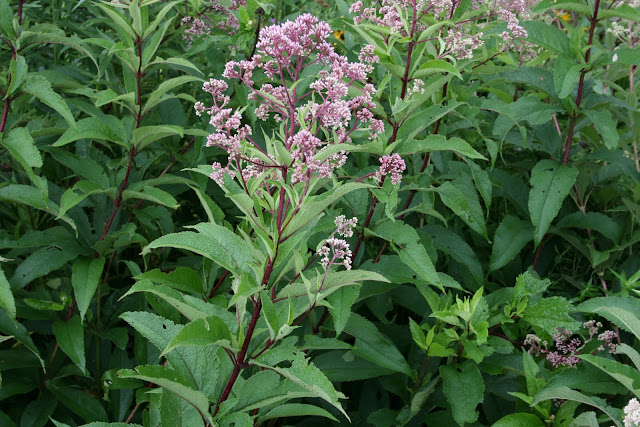 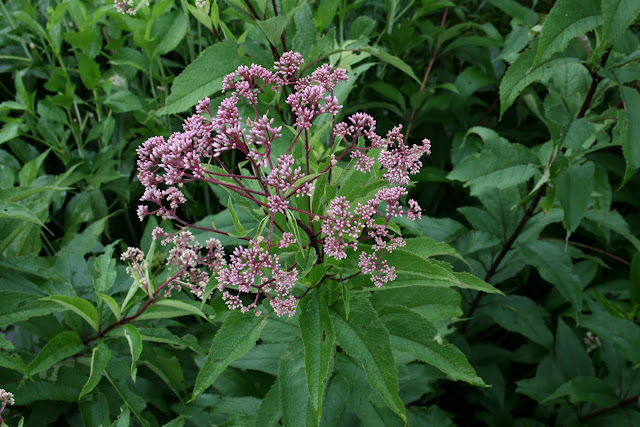 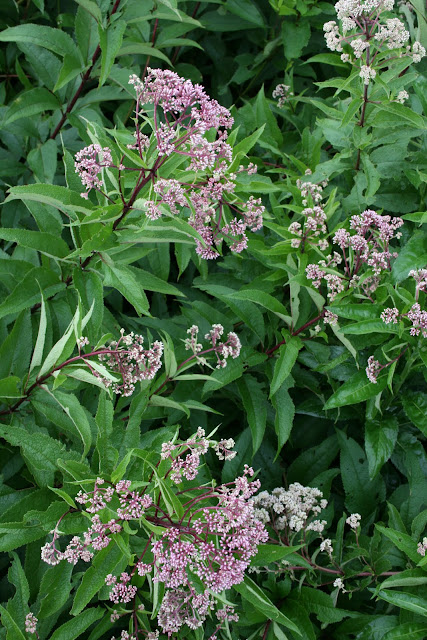 Joe-pye weed (Eupatorium fistulosum) is an extremely common component of open wet meadows and marshes throughout most of eastern North America, but is confined mostly to the northern portions of Florida.  In Florida, its distribution is disjunct.  It occurs in most panhandle counties and in a separate region around Orange, Lake, Polk, Seminole, and Osceola Counties in the interior.
The taxonomy of this species seems a bit confused and it gets moved back and forth out of the genus Eupatorium from time to time.  Currently, most Florida taxonomists have it there, but others list it under Eupatoriadelphis. Regardless, it is the same species.
Joe-pye weed is a favorite among butterfly gardeners because its large showy heads of lavender pink blossoms are nectaring magnets, and a favorite among wildflower enthusiasts because of the visual impact this plant makes in the garden.  Though it naturally occurs mostly in wet to very moist soil conditions, joe-pye weed can handle typical garden settings except extremely droughty soils. That may be why its use in much of Florida is limited.
This is a deciduous herbaceous perennial. It makes its appearance known each spring and then quickly grows upward to achieve a mature height of 5-7 feet by summer.  The stems are stout and the whorled leaves are thick and coarse.  Each is  about 5-6 inches long and noticeably toothed. The large corymbs of lavender pink flowers open in mid summer and last for weeks.
A stand of joe-pye weed is stunning in bloom, but the plants are difficult to control.  The truth is..., joe-pye weed suckers aggressively throughout the garden when conditions are to its liking.  It does not play nice with its neighbors and it easily outcompetes smaller, less aggressive ones.  For this reason, it is best used as a accent patch near a pond or marsh edge.  In such a setting, it will limit itself to the moist areas. It performs best in sunny and partly sunny locations, but it can survive shadier sites if kept moist.  It just doesn't bloom well under too much shade.
Currently, joe-pye weed is not grown by nurseries listed with FANN - the Florida Association of Native Nurseries, but is widely available from native-plant nurseries in states to our immediate north.  If you are truly interested in adding it to your landscape, choose a source as close to your home as possible and start with just a few individual plants.  If it is happy where you plant it, you will soon have more.
Posted by Hawthorn Hill at 6:38 AM