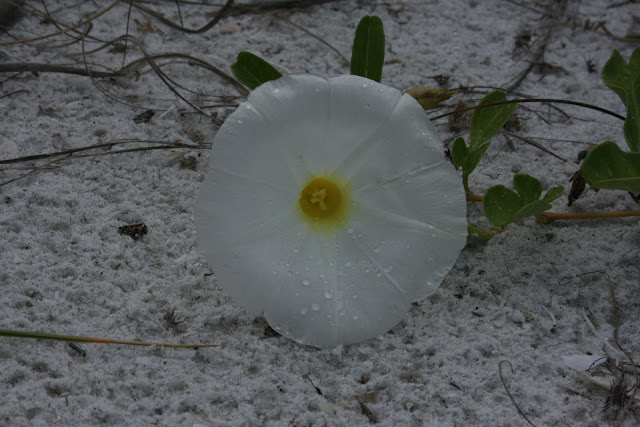 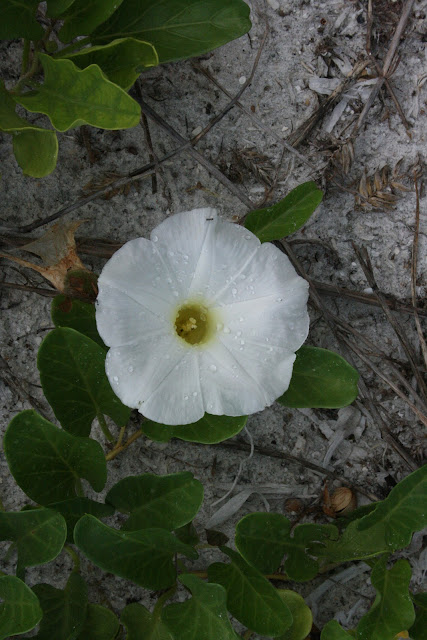 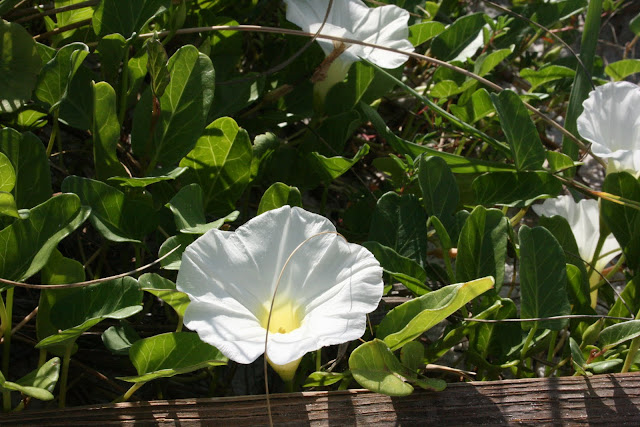 Beach morning glory (Ipomoea imperati) is the "other" native morning glory in Florida, common to beach dunes (the other being railroad vine, I. pes-caprae). Beach morning glory is found in coastal counties primarily along the Atlantic coast and the Panhandle.  It only occurs sporadically on the west coast, but is common in Pinellas County where I reside.  This coastal morning glory also is found up the Atlantic Coast to the Carolinas (though it may have been extirpated from North Carolina) and along the Gulf Coast to Mexico and beyond.
Beach morning glory is easy to distinguish from railroad vine, even when flowers are not present.  Though it has the same identical ability to ramble widely across the dunes, its foliage is almost arrow-shaped and definitely not cloven.  This is an evergreen perennial.
Like other members of this genus, flowering occurs in the morning hours and the blooms begin to wilt by mid-day.  The flowers are a brilliant white in color with a lemon-yellow throat.  On a white sand background, the beauty of these petals gets a bit lost, but well-grown specimens are especially attractive. Flowers are produced in every month if temperatures do not dip below freezing.
Beach morning glory is widely propagated by commercial nurseries, but is best used in beach dune restoration plantings.  In a typical landscape, it is impossible to control and will spread in all directions for up to 20 feet.  On a beach dune, however, it can run free and will provide invaluable services in stabilizing beach sands.
Posted by Hawthorn Hill at 5:43 AM