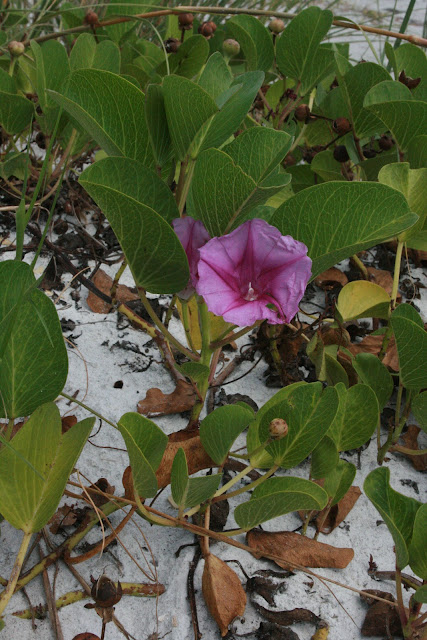 Railroad vine (Ipomoea pes-caprae) is one of two morning glories common to Florida's beach dunes.  It is common to the coastal counties of central and southern Florida, but occurs only sporadically in coastal Panhandle ones.  This is essentially a tropical/subtropical species and it is found on the dunes of southern Georgia and along the Gulf of Mexico to Mexico southward.  It also is distributed throughout much of the tropical world - it is found in Hawaii, for example, where Roger Hammer reports the plant was used by native peoples since ancient times.
This is an evergreen perennial renowned for its durability and ability to stabilize dune sands.  Railroad vine rambles great distances over the surface of the open sand.  It withstands being buried periodically by the shifting soils, then re-emerging to take off across the surface once more.  The stems and leaves are succulent and covered with a thick cuticle that helps it prevent water loss in this exceedingly inhospitable environment.  The leaves are rounded with a noticeable notch at the apex. This cloven appearance is what gives it its Latin name which means "goat's foot."
Railroad vine produces large rose-pink flowers throughout the year, if temperatures do not get too cold.  Like other members of this family, each flower opens only in the morning for one day, but plants bloom profusely and have multiple flowers every day. If you get to the beach too late, you simply have to return the next morning.
Because of its durability and beauty, railroad vine is offered for sale by a number of commercial nurseries devoted to native plants.  It is a wonderful plant for beach dune plantings, but a very difficult one for typical landscape settings.  Once, in my early naive years, I was involved in a native plant parking lot planting design.  The railroad vine we used soon escaped the medians and took off across the blacktop - where it was a major nuisance.  This plant can send runners in all directions, up to 20 feet long.  Be careful where you plant it, but if you have a coastal setting where it can ramble and stabilize your dune, use it liberally.
Posted by Hawthorn Hill at 5:09 AM