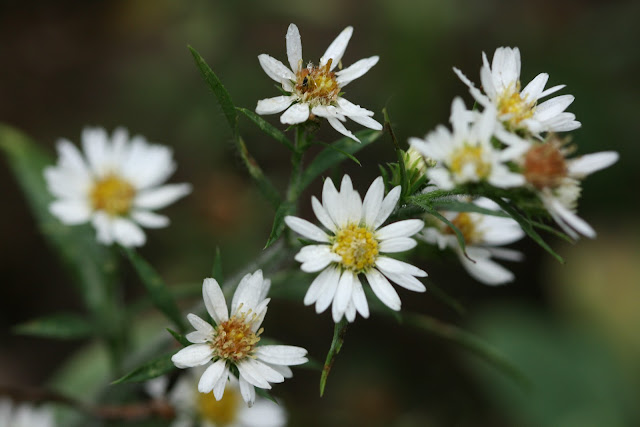 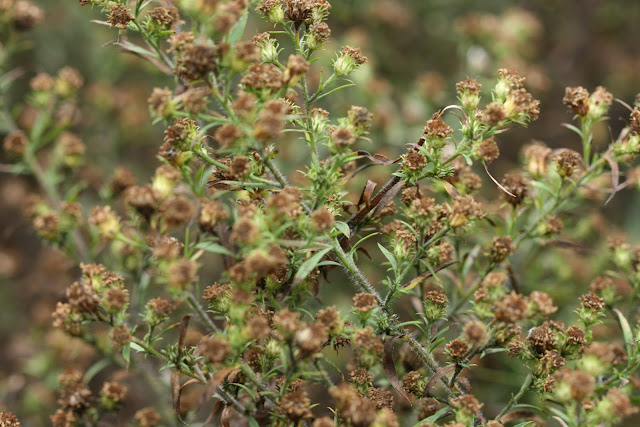 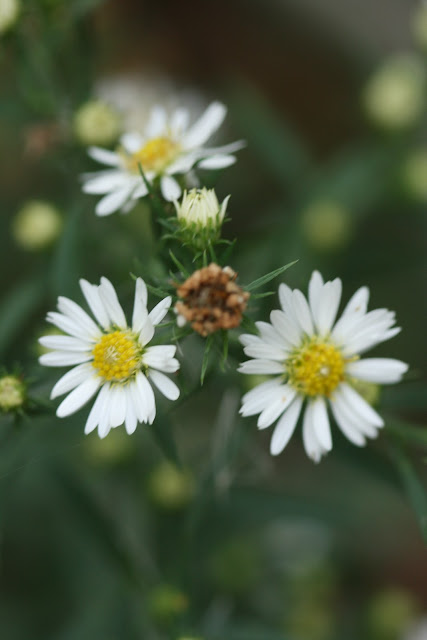 White oldfield aster (Symphyotrichum pilosum) occurs primarily in the Panhandle region of Florida, though it also has been reported in Marion County in the north-central portion of the state.  It is much more common north of us; its range extends across the eastern half of North America. A disjunct population also has been reported from British Columbia.
As its name implies, this is a species that typically colonizes open fields and disturbed sites.  Like most asters, it suckers and eventually forms colonies, but white oldfield aster does it aggressively and eventually forms dense masses in the landscape.  It dies back to the ground each winter, but maintains its many stems above ground well into spring.  At that time, a basal rosette of linear leaves emerges and each stem begins its upward growth.  By late summer, the stems are 2-3 feet tall. As the flower buds develop, they may arch over a bit and form a mound up to 3 feet across.
Blooming occurs in late fall or early winter; a characteristic that gives it its other common name of "frost" aster.  Numerous bright white ray petals surround a central disc of yellow blooms. Each head is 1/2 inch across. Plants (clumps) in bloom may have hundreds of flowers open at one time. Asters are exceptional magnets for pollinating insects and because these are open so late in the season, white oldfield aster is particularly valuable.
This species is not grown commercially in Florida at this time, though we hope to make it available at Hawthorn Hill by Spring 2013.  As we have not grown it in our own landscape, I do not know how easily it is maintained in landscapes outside its north Florida range. I suspect, however, that it can be "pushed" well into central Florida. If you are interested, contact me in late winter to see how our seedlings are doing.

Posted by Hawthorn Hill at 8:00 AM