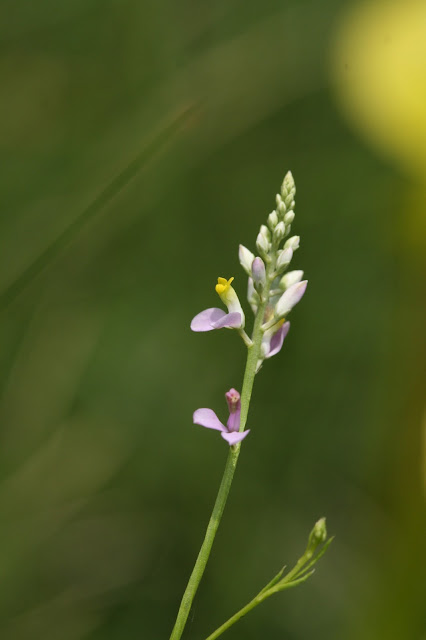 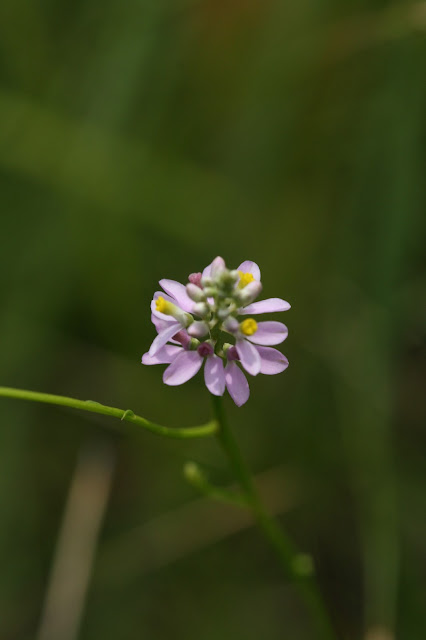 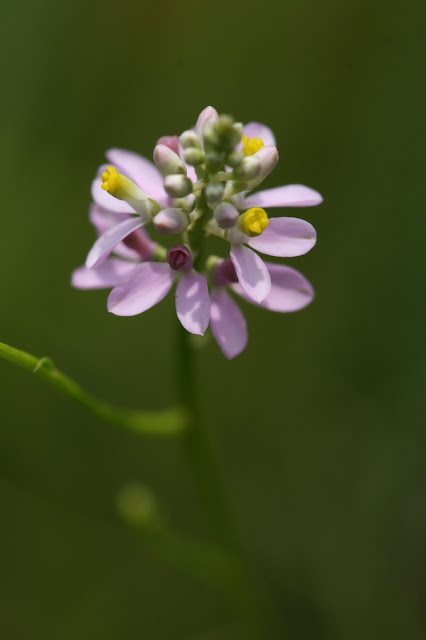 Chapman's milkwort (Polygala chapmanii) is one of 23 species of this widely variable genus in Florida. It has a very restricted distribution here, occurring only from the central Panhandle west.  In this region, it can be found in open wet savannas and flatwoods.  Outside of Florida, it is found from Georgia to Louisiana.
Polygalas generally are annuals. This species emerges in early spring and forms an erect stem that eventually reaches a height of 1-2 feet. It is very difficult to see, however, until the flowers open in early summer because it blends in perfectly with all the grasses, sedges, and other graminoids it occurs with.  The leaves are tiny, occur sparingly and solitary along the stem, and are filiform (grasslike) in shape.
The photographs above were taken in mid-June in Apalachicola National Forest, in an area that also included pitcher plants and Calopogon orchids..  The flowers are typical of the species, forming clustered racemes and blooming from the bottom up. Each bloom is a pale pink in color with bright yellow reproductive parts in the center. Plants in flower are pretty, but their relative small size makes them a bit less showy than many others in this genus.
Milkworts, as a genus, are not offered commercially for the home landscape. Because they are annuals, they need planting beds that allow them to reseed. I have not had success keeping any of the other more common species past one growing season, and I suspect Chapman's milkwort would be even more difficult because of its restricted habitat requirements.  Look for it during the early summer in open wet savannas, in areas where pitcher plants might be present, and admire it for its simple beauty.

Posted by Hawthorn Hill at 8:48 AM