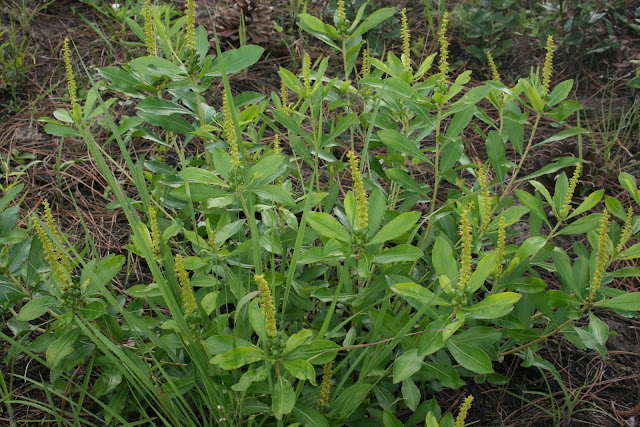 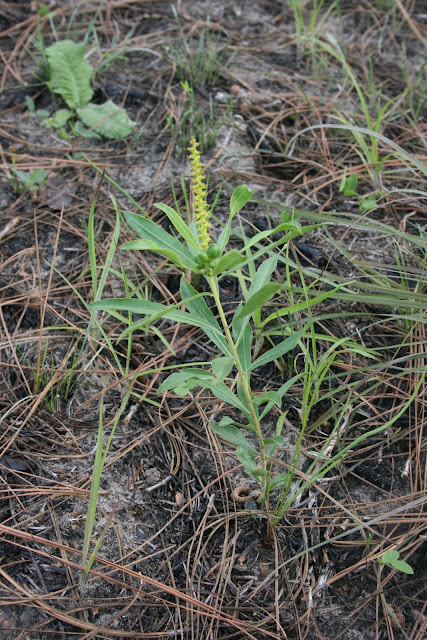 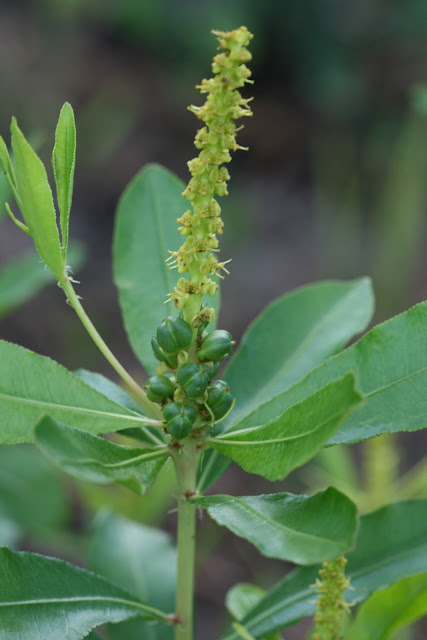 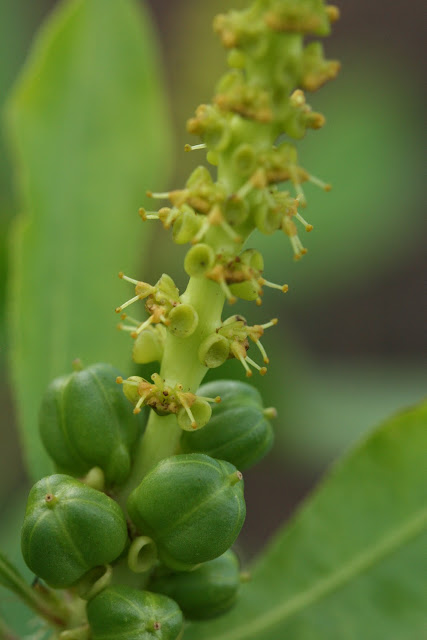 ﻿
Queen's delight (Stillingia sylvatica) is a common member of the euphorbia family, found statewide in Florida in upland sites such as sandhills, old fields and open woodlands.  It is found throughout the Southeastern Coastal Plain as well - from Texas north to Colorado and east to Virginia.  Throughout this range, it is often a common understory wildflower.
Queen's delight is a perennial, but generally loses its basal leaves in winter.  It re-emerges each spring and forms a rosette of leaves that can reach 12-18 inches across, though younger plants are not nearly as broad.  The leaves are elliptical, shiny, and a rich green in color.  Older plants can produce multiple stems, but younger ones have a single stem. Photos of both are shown above.
Flowering occurs in late spring and early summer.  As this is a euphorbia, the male and female flowers are produced on different parts of the stem.  The open male flowers lack petals and are formed on the top. The pollinated female flowers that are now ripening seed capsules are below in the above photographs.  Producing male and female flowers that open at different times ensures that another plant will pollinate it.
Queen delight's odd common name is often ascribed to it's value in herbal medicine. One story tells that it was used to treat syphilis and that its value in doing so delighted the Queen as this disease was ravaging the Old World at this time.  Tinctures from the roots of Queen's delight have also been used  as a blood purifier, digestive aid, and immune enhancer.  The Creek nation is also said to have made extensive use of this herb for medicinal purposes.
Queen's delight is an interesting, but not exceptionally beautiful wildflower that has not been offered commercially by members of FANN - the Florida Association of Native Nurseries. It has only margnal value to nectaring wildlife, but the foliage is sometimes eaten by browsing animals such as rabbits and white-tailed deer. It would be relatively easy to propagate from seed if you wanted to try it. Wait for the capsules to turn dark, collect a few, and store them in a brown paper bag or other such container where they can dry. They will split when black and fully ripe, releasing the small seeds. Sow them just below the soil surface.