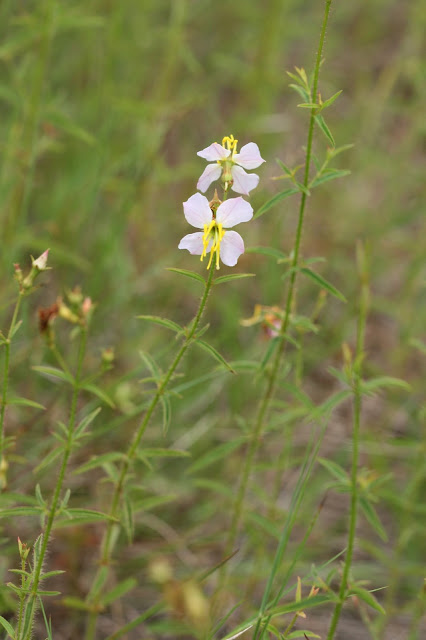 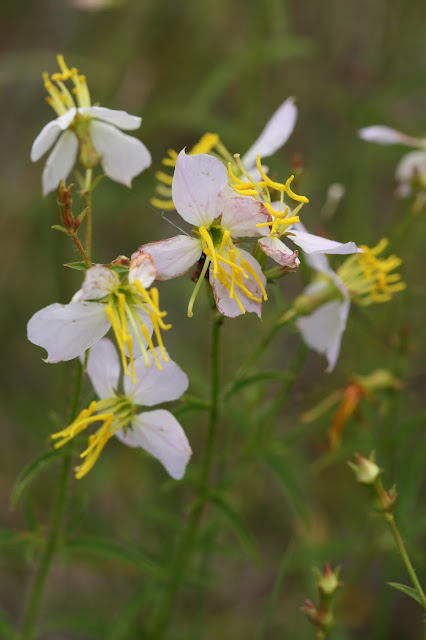 Handsome harry (Rhexia virginica) is one of ten species of meadow beauties resident to Florida. Common to moist flatwoods, and the margins of open savannas and other wetlands, it occurs across the northern tier of counties in Florida from the far west to the Jacksonville area.  This is a common species to our north, and occurs in every state east of the Mississippi River as well as the line of states immediately west of it.
Meadow beauties are perennial herbaceous plants that die back to the ground each winter, and handsome harry is no exception.  By late spring it reaches a mature height of several feet and initiates blooming.  The stems are squarish, somewhat like a mint, but these belong to the Melastoma family. They are also covered with bristly trichomes - "hairs".  The leaves of this species are opposite on the stem and somewhat variable in shape.  The plants photographed above have lanceolate leaves, but sometimes they are more ovate.  When they are linear, this species could be confused with the much rarer  panhandle meadowbeauty (R. salicifolia). The foliage of handsome harry, however, is held horizontal to the ground and the leaves are sessile and never twisted upright as they are in panhandle meadowbeauty.
The flowers range in color from the pale form pictured above to a richer pink.  Like most other members of this genus, there are four broad petals and many long curved yellow anthers. These make the plant showy when in bloom. Pollination comes mostly from bees. Like all members of the genus, the pollinated flowers form a brown urn-shaped seed capsule that persists well after the petals have fallen. These seed capsules make identifying the genus easy throughout much of the year.
Rhexias are only occasionally offered for sale commercially.  They are undemanding, if their moisture requirements can be met.  Though somewhat forgiving of short droughty periods, it perfers extended periods during the growing season of ample moisture.  Handsome harry performs best in north Florida and other similar species should be tried further south here if you wish to add it to your landscape.
Posted by Hawthorn Hill at 8:10 AM