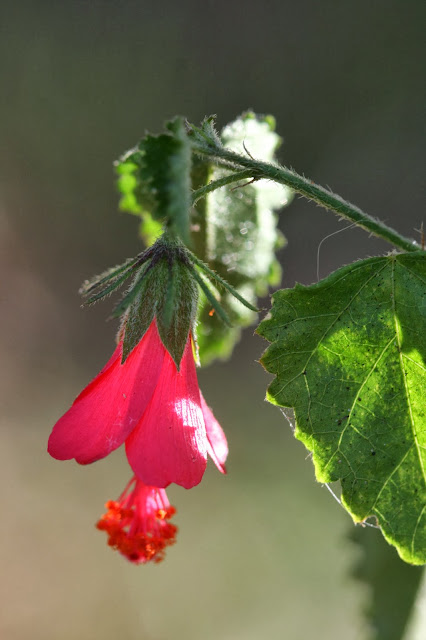 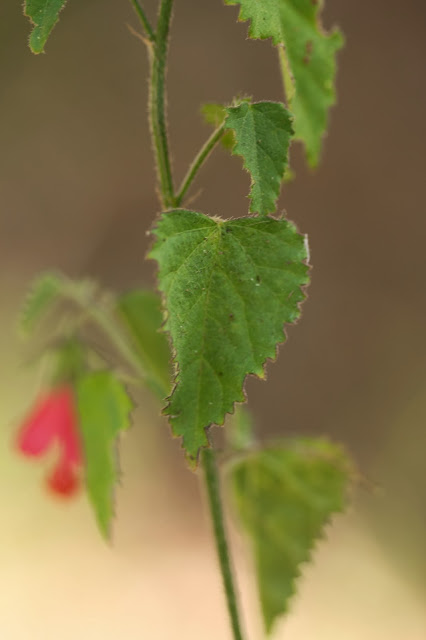 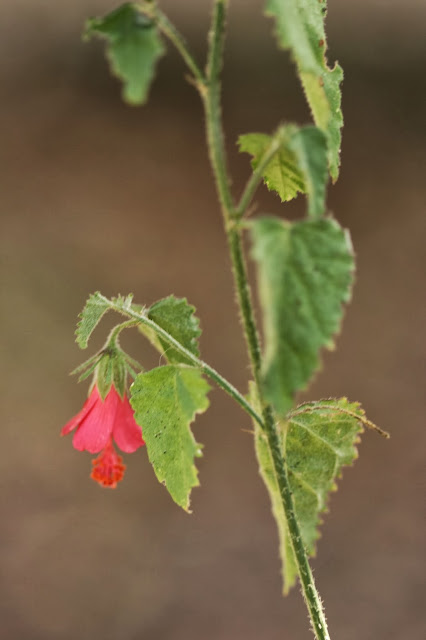 Poeppig's rosemallow (Hibiscus poeppigii) is a perennial evergreen species native to extreme south Florida - Miami-Dade County and the Florida Keys. It is quite rare in Florida and listed by the state as an endangered species.  This is a tropical hibiscus, also is found in the West Indies and Mexico.  Throughout its range, it is found in upland woods and in open coastal areas, often in shallow soils with limestone beneath.
Poeppig's rosemallow is a semi-woody dwarf shrub. It often reaches mature heights of 2-4 feet, but may grow as tall as 6 feet in ideal conditions. Unlike most of Florida's native hibiscus, it does not die back to the ground in winter, but keeps its leaves and may bloom during any month.  It is cold sensitive and will be killed by temperatures below freezing.  Therefore, it is best used in parts of tropical Florida or as a potted plant that can be moved indoors during nights that dip below 30 degrees F.
Poeppig's rosemallow produces multiple thin stems that ascend off the main semi-woody trunk.  The ovate, deeply toothed leaves are alternate along the stem and both the leaves and the green stems are roughly hairy. Overall, the plant assumes a somewhat rounded appearance - more so if kept lightly pruned.
While not an exceptionally beautiful foliage plant, Poeppig's rosemallow compensates by producing good numbers of carmine red, bell-shaped blooms.  Each is only about 1 inch long, but they are enchanting. Small, rounded seed capsules follow about a month later.
In the right location, Poeppig's rosemallow makes an interesting addition to the home landscape. It is drought and salt tolerant, performs well in full to partial sunlight and fits well into many landscape settings. Regrettably, it is not widely propagated and not currently offered by any of the native plant nurseries affiliated with FANN - the Florida Association of Native Nurseries.  It can be purchased from a few south Florida native plant sources with some sleuthing. Currently, we have a few seedlings from our plants at Hawthorn Hill that we hope to have ready for sale in spring 2014. Inquire if you are interested.
Posted by Hawthorn Hill at 7:49 AM