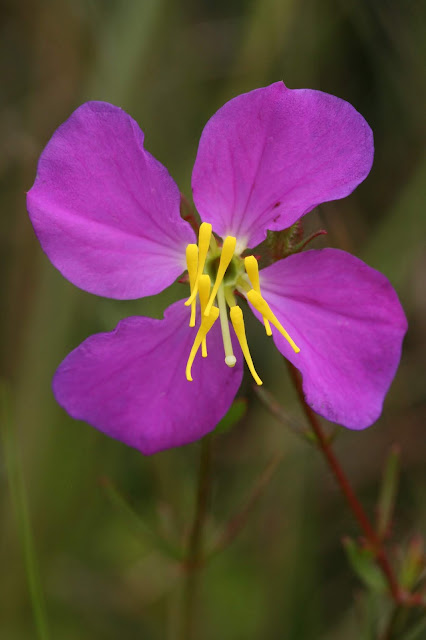 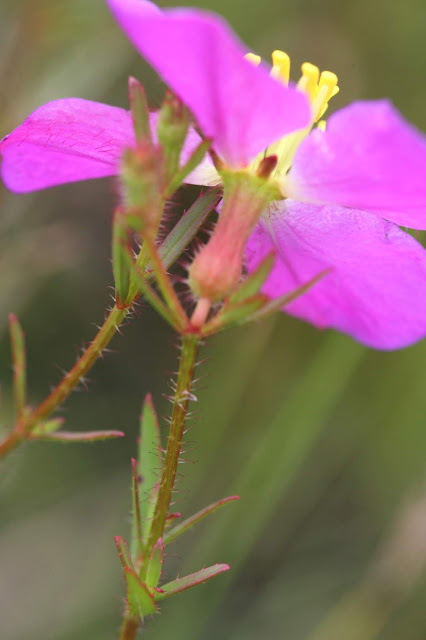 Despite its common name Cuban meadowbeauty (Rhexia cubensis) has a rather extended range in Florida. It has been reported from nearly every county in Florida and also occurs from Louisiana to North Carolina region of the Southeastern Coastal Plain. It also occurs in parts of the Caribbean, and as its name suggests, the type specimen was first collected in Cuba.
Meadowbeauties are mostly perennials with flowers in various shades of pinks - sometimes white (there also is a yellow one in north Florida). Their urn-shaped seed capsules are the dead giveaway in getting them to genus. Getting the pink ones to species, however, requires a close look at various details of the stems and buds. Cuban meadowbeauty is often a much deeper shade of pink than the other seven mostly pink species. Each bloom is larger than most too - about 2 inches across. What is most distinctive, however, as the still hairs that occur up the stem, along the leaf margins, and on the urn-shaped ovary below the petals. These hairs are stiff and very noticeable to the touch.
This is a species of moist soils - flatwoods and prairies. It can occur in average moisture soils, but it thrives only in situations where it gets wet during the summer rainy season.
Like other members of this genus, the summer flowers have 4 large petals and an inner center of extended yellow anthers. In Cuban meadowbeauty, these anthers are greatly extended. Meadowbeauties seem of special interest to bumblebees, but other pollinating bees visit them.
This genus, though showy, is rarely propagated by nurseries not specially devoted to wetland restoration. I have found them to be difficult in mixed wildflower settings, though they spread easily in naturalized wildflower meadows that maintain adequate soil moisture. Look for this species throughout the state, but don't rely simply on the color of the petals to distinguish it. Look at (and feel) stem for the bristly hairs.

Posted by Hawthorn Hill at 2:30 PM