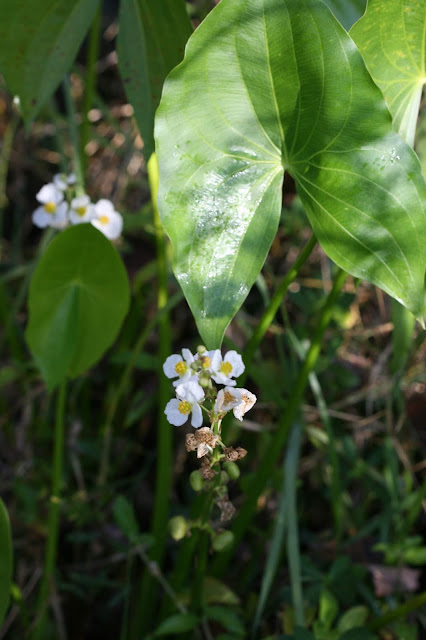 Arrowleaved duck potato (Sagittaria latifolia) goes by a great many common names, including broadleaf arrowhead and common arrowhead. It is easily told from its close cousin, duck potato (S. lancifolia) by the noticeable difference in their foliage. While the latter has decidedly lance-shaped leaves, arrowhead duck potato has broad leaves that look like arrowheads. Arrowhead duck potato occurs in most Florida counties in wetland edges - the same habitats as duck potato, and it has a much larger natural range across North America. It is reported from all of the Lower 48 states as well as the first (southern) tier of Canadian provinces.
This is an herbaceous perennial that holds its leaves through winter in most Florida counties, but dies back to the ground (mud) north of here during the winter. Growth arises from a stout underground tuber (the "duck potato") and new plants spread from this over time - eventually forming large masses at the edges of ponds and other open sunny wetlands. Each leaf is 8-12 inches across (sometimes broader) and stands several feet tall.
The flower stalk emerges from the center of each basal rosette of leaves and the flowers open from early summer until frost. The stalks do not tend to stand as tall as they do on duck potato and the flowers are not quite as large. They are pollinated similarly, however - butterflies and bees.
Although arrowleaved duck potato is widely distributed, I see it less frequently in the field than S. lancifolia, and I rarely see it purposely added to wetland plantings the way duck potato is.  I have never quite understood why as I've added it to the edge of ponds and other wetlands here in central Florida for a number of years and it has done extremely well. Regardless, it is available in the native nursery trade.  Use it at the shallow edges of ponds and other seasonably flooded wet areas.
Posted by Hawthorn Hill at 12:54 PM