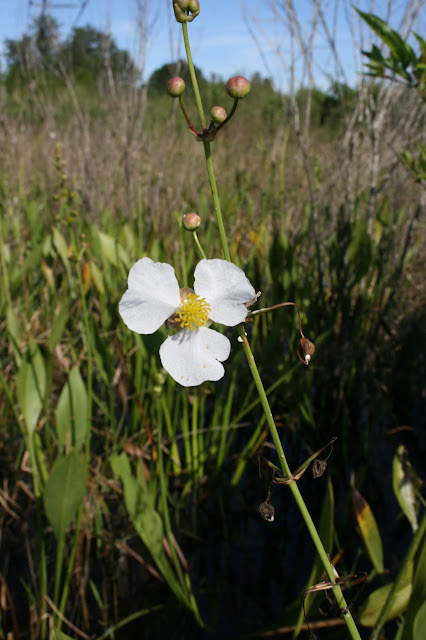 Duck potato (Sagittaria lancifolia) is one of Florida's most common wetland herbaceous plant and found statewide in open wetlands, marshes, pond edges and wet open prairies. It also is commonly planted in wetland mitigation sites and in the littoral zones of created ponds. This is the case, because this is a very adaptable plant as long as its added to soils that are moist in the dry months and wet in the summer. During the extreme, it can tolerate water as deep as 2 feet for a month or two, but prefers 12-18 inches. Duck potato is also common in states to our north - it is reported throughout the Southeast Coastal Plain from Texas in the west to Maryland in the east.
Duck potato is a perennial forb that generally holds its basal leaves through the winter as long as temperatures are not too cold. It arises from a stout underground tuber, that is a food source for a few of the diving ducks. Over time, this plant spreads outward from these tubers and forms colonies. Stout lance-shaped leaves stand well above the waterline and can reach heights of 3 feet or more.
Flowering occurs during most months. The 4-5 foot tall stalks arise from the center of the basal leaves and multiple buds branch of this main stem. As in all members of this genus, the flowers are characterized by 3 broad white petals that surround a yellow center. They are pollinated by wetland butterflies, especially some of the grass skippers, and by bees. The flowers are followed by round seed capsules that are covered by small "warts."  These eventually split into 3 sections and the seeds inside are dispersed.
This is a native species widely propagated by the native plant industry. Along with pickerelweed (Pontederia cordata), it is likely the most commonly planted wetland plant in Florida. As such, it makes an easy to grow addition to a lake edge planting or around an artificial pond. It will not thrive for long, however, if you can't keep it wet enough.
Posted by Hawthorn Hill at 12:28 PM