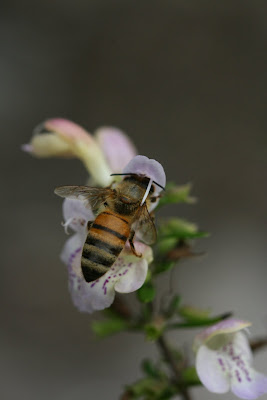 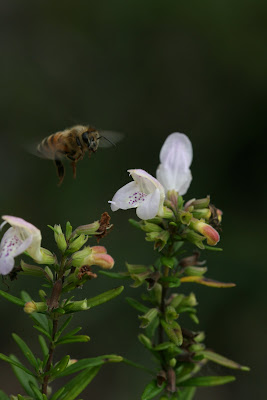 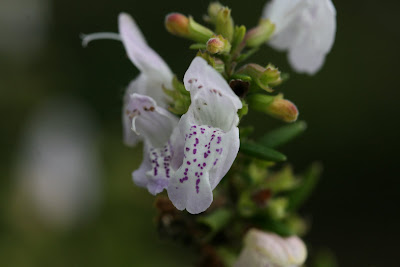 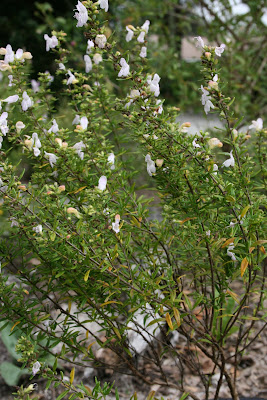 This beautiful member of the "savory" or "calamint" genus is extremely rare in Florida and is listed as a state Endangered species. It is widespread in appropriate habitats elsewhere throughout the Southeastern Coastal Plain, however. Like other Calamintha's, it requires upland sandy soils with extremely good drainage and prefers sunny to mostly sunny conditions. It is not, however, as narrowly restricted to sandhill and scrub habitats like the other three species in our Florida flora and it will tolerate some shade.


Georgia calamint is a robust woody sub-shrub that can reach nearly 2 1/2 feet in height, but is usually nearly a foot shorter when observed in nature. This species is a bit different than other members of this genus in Florida as it is deciduous (instead of evergreen) and its leaves are narrow and elliptical and show almost no evidence of curling under. It also is a very handsome specimen from a purely floristic point of view - except during the brief winter period when it is leafless.


Georgia calamint is another mostly fall-blooming species. Few blooms, if any, should be expected during other months. But, when it is in bloom, it is simply covered, head to foot, with the pale purple flowers typical for most members of this genus. Blooming can last for more than a month, but the peak is a ~2-week event.


Because of its widespread distribution and somewhat tolerant nature, Georgia calamint is offered by a variety of native plant nurseries in Florida and in states adjacent to us. Plant it in Florida in well-drained soils with plenty of sun and water it well until it is well established. The flowers attract butterflies, but are especially attractive to a wide assortment of bees. Use it near a walkway or the front of a mixed wildflower bed so its foliage and flowers can be admired. Just don't plant it too close to places you may walk by regularly as its branches are brittle and will break if touched too energetically.

Posted by Hawthorn Hill at 8:13 AM