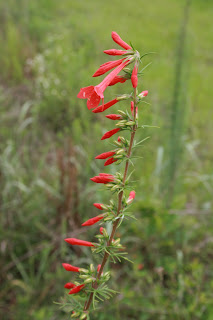 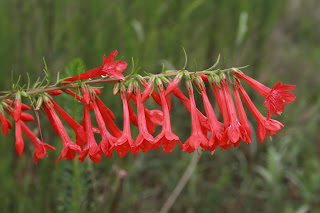 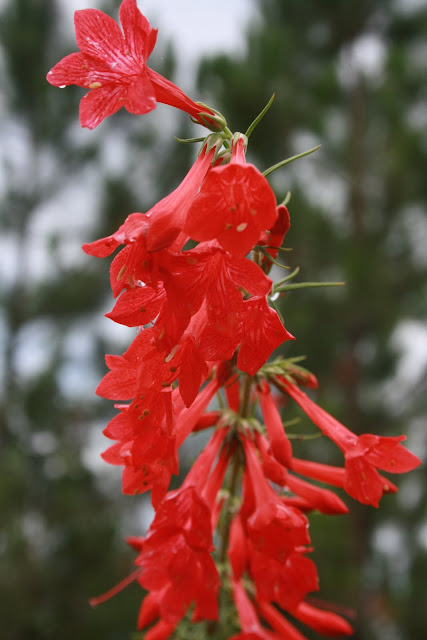 Standing cypress (Ipomopsis rubra) is not a relative in any way of the cypress trees (Taxodium spp.) so ubiquitous to Florida.  Perhaps its common name comes the the vague similarity of the foliage between these two disparate plants, but even that is a bit of a stretch.

Standing cypress is actually a member of the phlox family and a resident of well-drained sandy soils from the Jacksonville area of Florida south to the central peninsula.  It is only widely reported in the panhandle of Florida, but is common across the Southeast to Texas and occurs in much of eastern North America north to Ontario.

Few native wildflowers can boast of being as brilliant red as standing cypress and specimens in full bloom are a sight to behold.  At blooming time in late summer/early fall, individual plants may be 6 feet tall and have dozens of open flowers at any one time.  Individual flowers may be nearly 1 1/2 inches long and their tubular shape makes them magnets for hummingbirds as well as larger butterfly pollinators such as cloudless sulphurs.

Standing cypress is not an easy garden plant, however.  For one thing, it is a biennial.  Individual plants spend their first year as a dense rosette of finely dissected leaves.  In this state, they are not especially attractive.  It is only in the second year that they bloom.  In late spring, individual plants begin to grow skyward where they will eventually reach 5-6 feet tall in August.  During this time, the plants look a bit like the weedy dog fennel (Eupatorium capillifolium) until they flower.  After flowering, the plants set large numbers of seeds and scatter them as they die.

Standing cypress also is very particular about its growing conditions.  I have killed a good number over the years by planting them in soils without the proper drainage.  It is especially susceptible to root rot and other fungal problems if drainage is not nearly perfect.  Do not attempt this plant in soils other that well-drained sands.

Lastly, standing cypress has a tendency, like many of the blazing stars (Liatris spp.), to fall over instead of standing upright.  When this occurs, the tall wands snake across the understory for several feet before rising up once more.  This is a particular problem in soils that are too rich or in planting areas that are not in full sun.  But, regardless of where you plant it, you may have to stake up some of your specimens to show them off to their full potential.

Standing cypress is difficult for nurseries to maintain in pots so it is only infrequently offered and sometimes looks a bit ragged.  If you have the right growing conditions, take a chance and plant them in clusters of at least 5.  Then collect the seed and keep your population growing over time by sowing it in flats with a potting mix high in sand content.  The late summer show of color will amply reward you for your trouble.