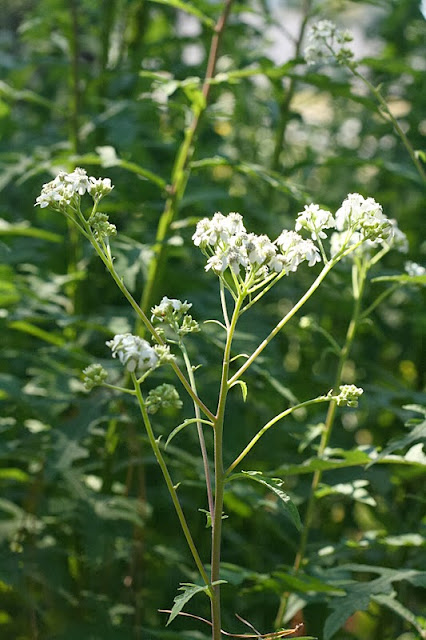 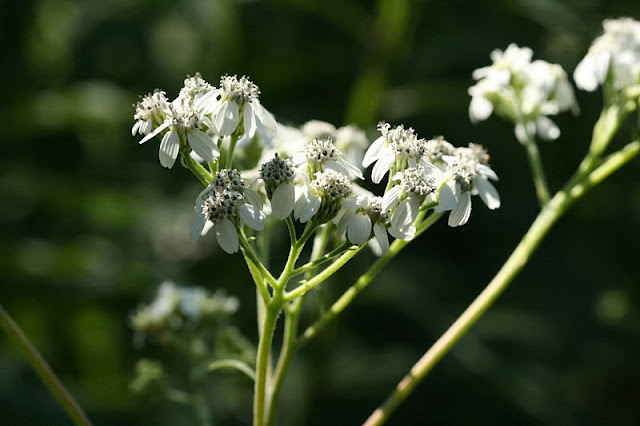 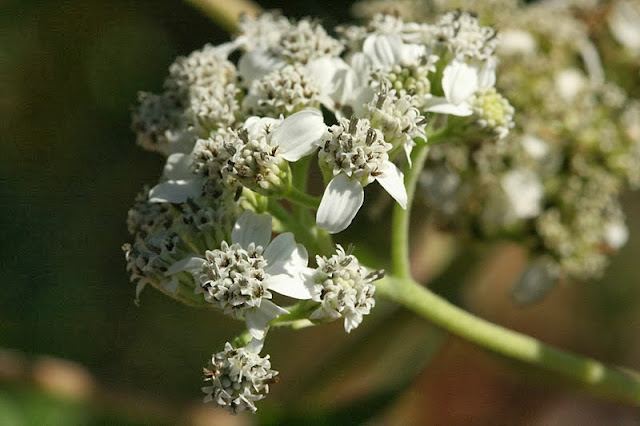 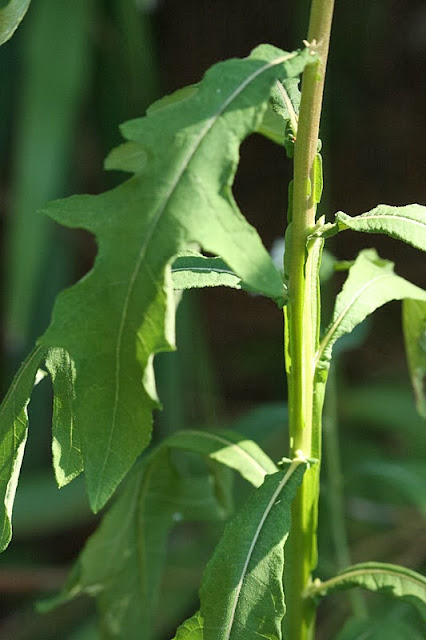 Frostweed or winged stem (Verbesina virginica) is common statewide, occurring most often at the edge of hammocks where it receives part sun and average to moist soil, though it is remarkably tolerant of a wide variety of conditions.  It also occurs throughout much of the eastern half of the U.S. - west to Texas and north to Iowa and then east to Pennsylvania. Throughout this range, it is rather common.
The common names for this plant are self-evident; "frostweed" because it blooms so late in the fall and "winged stem", because of the wing-like appendages on the stem seen in the bottom photo above. This is a coarse, robust herbaceous species that dies to the ground each winter (some basal leaves may remain depending on latitude) and emerges quickly each spring.  Though not woody, it eventually reaches heights of 6-8 feet by October.  The tough scabrous leaves are toothed along the margins and can be nearly 12 inches long - especially near the base.  At its mature height, this is a somewhat weedy looking wildflower and large enough to overwhelm smaller species around it.
Despite this nature, there are good reasons to admire frostweed when it is in bloom.  In October and November, individual plants produce large numbers of white flowers with porcelain white ray petals.  At this time, they are a bevy of activity, attracting pollinators of all types.  The first time I encountered this plant, at Highlands Hammock State Park in Highlands County, I must have counted at least 50 tiger swallowtails nectaring on a patch that lined an old citrus grove.  There were other pollinators too, but the swallowtails captured my attention and I pretty much ignored everything else around me.
Frostweed is sold by a number of commercial nurseries affiliated with FANN - the Florida Association of Native Nurseries, but it should be added to a home landscape with forethought.  For one, it is tall and dominating.  Use it at the back of a mixed wildflower area or as a screen, but if used to screen a view, realize that it is deciduous and absent during the winter months.  Second, it spreads quickly once established and will require annual thorough weeding to keep it only where you want it.  But, if you take this all into account, it can be a very valuable addition to a pollinator garden.
Frostweed thrives in a very wide variety of conditions.  It may perform best if planted in partial sun or locations where it gets sun for half days, but it will flower if given more or less sun than that.  It prefers moist soil, but is amazingly tough in droughty soils as well.  Just don't plant it in submerged locations or in full sun on top of a sand dune.
Posted by Hawthorn Hill at 5:19 AM