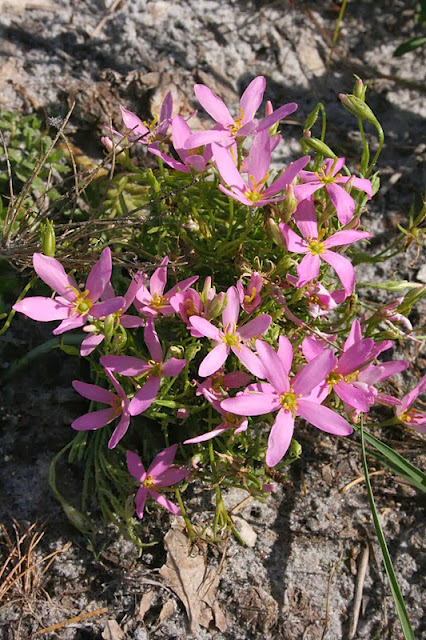 Rose of Plymouth (Sabatia stellaris) is one of Florida's most widely distributed marsh pinks; found statewide from the western panhandle to the Keys.  It is a species of the Southeastern Coastal Plain and is distributed from Louisiana to Florida and north up the Eastern Seaboard to New York and Massachusetts.  It is quite rare, however, in the northern portion of its range; it is listed as state endangered in Connecticut and Massachusetts and threatened in New York and Rhode Island.
Rose of Plymouth is sometimes called "sea pink", and it is both tolerant of salt and flooded soils.  Although it is considered an "obligate" wetland plant by the National Wetland Inventory, I have found it often in seasonally wet pine flatwoods where soils are often dry for months at a time.
Sabatias/marsh pinks are annuals and require open soil to reseed and spread over time.  Depending on the latitude in Florida, seedlings quickly emerge in early spring and reach their mature height by summer.  The plants above, that I photographed in a mesic pine flatwoods in Lee County, were only about 6 inches tall, but they often reach heights of about 12 inches.  The foliage is much reduced and the plant consists mostly of thin stems that overlap each other and form an almost rounded mass.  Flowering occurs at the ends of the stems and lasts for many weeks.
Like most in this genus, rose of plymouth produces a great many soft-pink blooms.  The centers are vivid yellow and form a star-shaped pattern around the green ovary.  There are five petals.
Marsh pinks, because they are annuals perhaps, are not often grown commercially by any of the commercial nurseries affiliated with FANN - the Florida Association of Native Nurseries.  We also do not propagate these species at Hawthorn Hill.  To grow this in a landscape would require providing it with ample moisture, especially in the summer season, and ample light.  To persist, it would also require open soil to reseed into.  But, perhaps this is a species and a genus that is simply best admired in those wild places where it occurs.
Posted by Hawthorn Hill at 6:16 AM