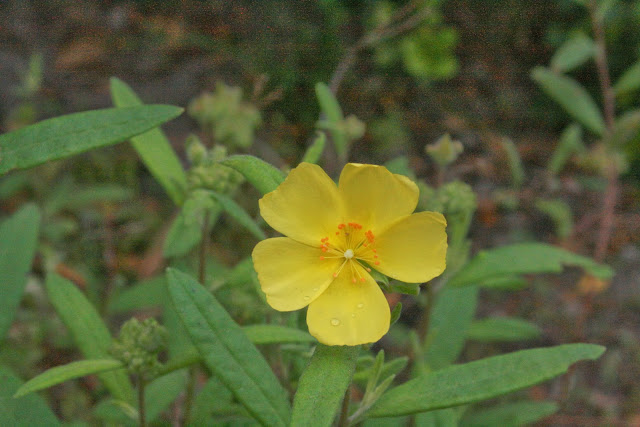 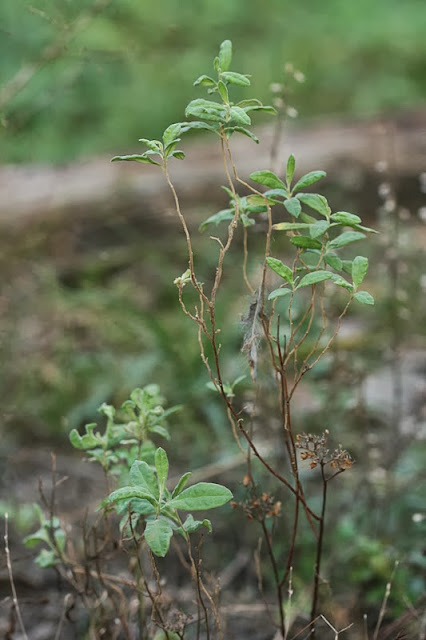 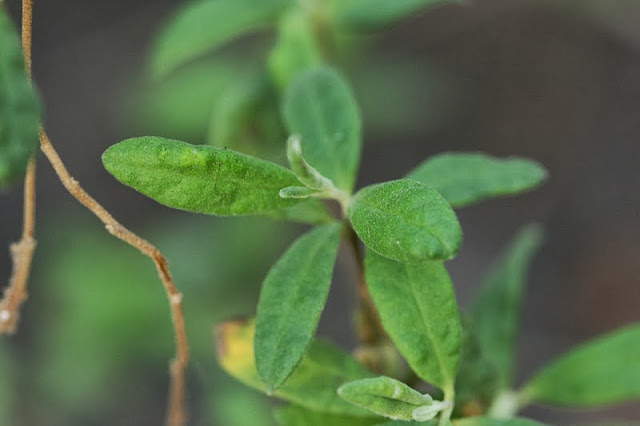 Pinebarren rockrose (Crocanthemum corymbosum) is found statewide in open well-drained habitats, including scrub and sandhill.  This is a plant of the Southeast Coastal Plain and also occurs from Mississippi to North Carolina.
Like other species in this small genus, pinebarren rockrose is a perennial sub-shrub.  Its thin wiry stems rarely stand taller than 12 inches and the plants are tardily deciduous in late winter.  Over time, this species slowly suckers and produces a mounded colony that can be several feet across.
The foliage is sparse; often clustered near the ends of the stems. Each leaf is elliptical, bluish green and with deep-set veins.  The edges of each leaf tend to roll under along the leaf margin as well.
Flowering can occur for several months; from late spring to early summer.  This is when this plant truly "shines".  Large numbers of bright yellow blossoms adorn the top of each stem. They have five petals and, in sharp contrast to each, are bright orange anthers.  Each bloom last only a day, but the buds are arranged in clusters and they open in succession.
The rockroses make excellent additions to the front of a mixed wildflower garden, but they are rarely offered.  We have been growing pinebarren rockrose for several years at Hawthorn Hill, but generally have it only in small numbers.
This is an easy wildflower to maintain.  Give it plenty of sun and good drainage.  It is forgiving if not exposed to too much water or shade.  Give it some room too, as it will want to spread out and it will be more striking if it isn't competing for space.  Because of its low stature, it should be grown with other small wildflowers such as twinflower, wild petunia, pink penstemon, and the like.
Posted by Hawthorn Hill at 1:53 PM