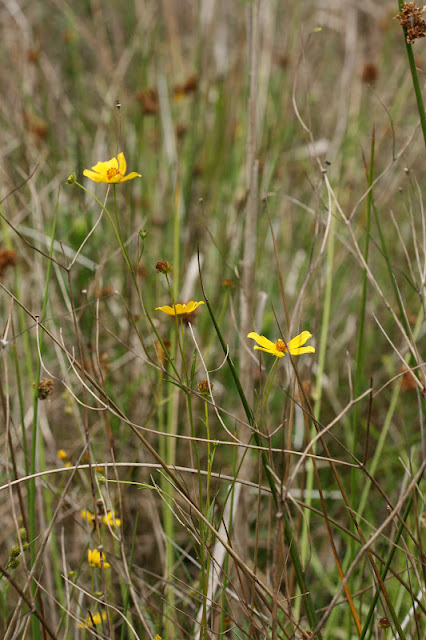 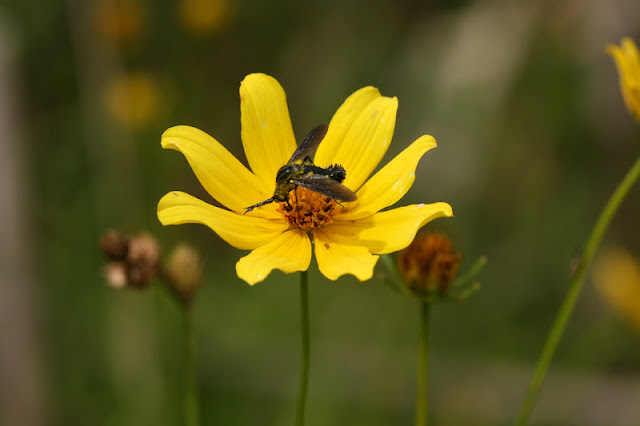 Small-fruited bur-marigold (Bidens mitis) occurs nearly statewide in Florida, except for the extreme southern tier of counties.  Outside Florida, it is confined to the Atlantic Gulf Coast - the one-state-wide row of states from Texas to Maryland. Throughout this region, it is an herbaceous obligate wetland wildflower, common to a very wide variety of fresh and brackish habitats.  This species thrives in the open, but can tolerate partially shaded areas.
Small-fruited bur-marigold is similar to its close cousin, Bidens laevis.  Both are found statewide, but only B. mitis occurs in brackish systems as well as freshwater ones.  Though both species bloom mostly in the fall, B. mitis is more likely to also bloom in late spring and early summer.  Finally, there is an obvious difference in the foliage.  B. laevis has wide elliptical leaves that are unlobed while B. mitis has variable leaves, some of which have lobed margins.  I have written about B. laevis previously. The plants photographed above were in flower in late March.
Small-fruited bur-marigold is an annual.  Seedlings grow rapidly in the spring and can reach their mature height of 2-3 feet by March.  They are rather weak-stemmed plants and have a tendency to bend over under the weight of the open blooms.  They may occur on the shore of wetland systems, but more often occur in the shallow water edge, 4-6 inches deep.
The flowers are bright yellow. Both the ray and disk flowers are similarly colored.  Each is about 1 inch across.  Multiple flowers are produced on the long wiry stems and their many side branches.
Like all members of this genus, small-fruited bur-marigold produces seedheads full of small dark seeds (achenes) covered by tiny spikes that cause the seeds to stick to clothing and hair.  In this way, "beggar-ticks" as they are sometimes called, move about to new habitats and sometimes earn the ire of both hikers and pet owners.  B. mitis, unlike other species of this genus in Florida, do not have long "horns" at the end of their seeds that further enable them to stick, just many small spiny "hairs".
Small-fruited bur-marigold makes a beautiful addition to certain wetland restoration projects, but is not a great choice for home landscapes except in areas that will not be walked in and along shorelines of permanently wet systems. As such, it is sometimes offered by commercial nurseries that specialize in wetland restoration.
Posted by Hawthorn Hill at 7:22 PM