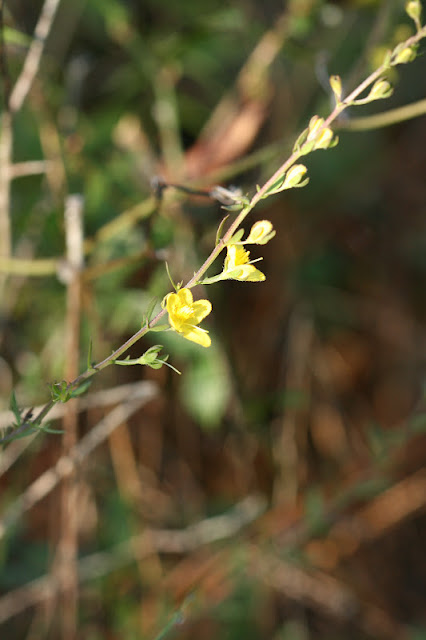 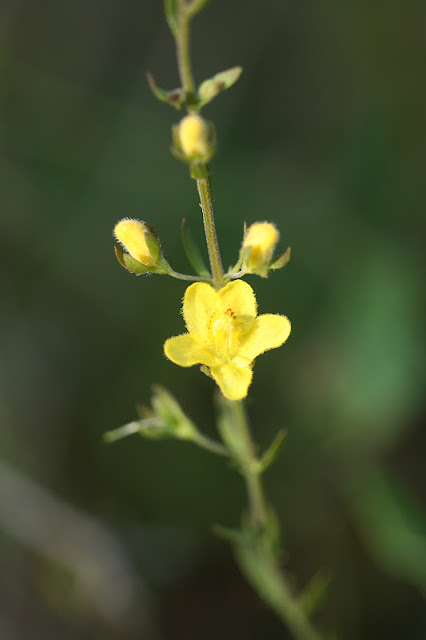 Piedmont blacksenna (Seymeria pectinata) occurs statewide in Florida in a variety of well-drained uplands - pinelands and open woods.  It is also found throughout the Southeastern Coastal Plain states from Louisiana to North Carolina in similar habitats.
The blacksennas are annuals and semiparasitic on the roots of other plants.  As members of the Orobanchaceae family, they share the trait of being semiparasitic with members such as false foxglove (Agalinis spp.) and bluehearts (Buchnera spp.). They also share the ability to serve as the larval food of common buckeye butterflies.
Piedmont blacksenna emerges in early spring and quickly attains its mature height of about 2 feet.  It is a lanky plant with a few basal leaves and a thin wiry stem.  Very narrow pointed leaves attach themselves up the stem, normally opposite each other.  Unlike its close cousin, S. cassioides, these leaves are lanceolate, not filiform (like a filament) and the buds are "hairy" not smooth. You can see the hairiness of the buds and petals on the lower photo above.
Flowering occurs in late summer and early fall.  The bright yellow, 5-petal flowers open from bottom to top and are produced for many weeks. They attract a variety of pollinators, but mostly bees.  Multiple stems are often produced by each plant.
Piedmont blacksenna is not a particularly showy plant, but it has a simple beauty - especially when seen in its natural habitat, blooming with a variety of other wildflowers. It has value in a butterfly garden as larval food for common buckeye caterpillars, but it has not been propagated, to the best of my knowledge, by anyone commercially.  Annuals are tough to grow commercially as they take time to get to blooming size and they die shortly after that.  They are tough to keep in a garden because they have to have conditions where they can reseed successfully.  If you wish to attempt it, collect seed (legally - with permission from the landowner) in the fall when the seed capsules are ripe. They are tiny, so they are best sowed on a flat of potting soil instead of directly in the garden.  Piedmont blacksenna does best in sunny, well-drained sites associated with other wildflowers and native grasses. Or, you can simply admire it when you are hiking upland habitats in Florida - and if you do, look for the brightly colored caterpillars of common buckeye butterflies feeding on them.
Posted by Hawthorn Hill at 6:14 AM