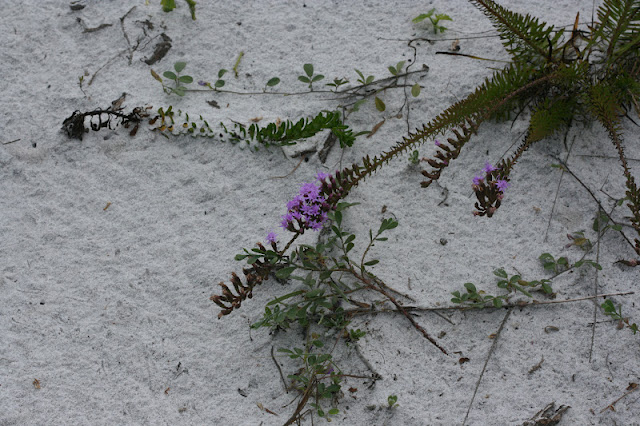 Piedmont or Few flower blazing star (Liatris pauciflora var. secunda) is a species for which little has been written.  The plants photographed above occurred on the back dunes and coastal strand scrub at Topsail Beach Preserve State Park in Walton County.  Its status as a recognizable variety is given by Wunderlin and Hansen, our state's most recognized plant taxonomists, but it is not recognized by others.  Overall, the variety of this species occurs in the farthest six counties of Florida. The species, including this variety, has been reported in much of north and central Florida - as well as the Southeastern Coastal Plain from Alabama to North Carolina.
This is a species adapted to harsh, well-drained conditions that experience salt spray.  Like all blazing stars, it is a perennial that dies back to the ground each winter and emerges in spring.  On the beach dunes, it tends to sprawl along the sand instead of standing upright.  On the back dunes, it often adopts a more upright manner.  Mature specimens reach a height of about 2-3 feet.  The lower leaves are arranged somewhat like a Christmas tree and do not reach the height of the flower buds - as they do in Chapman's blazing star (L. chapmanii), for example.
Flowering occurs in late summer and very early fall - a bit earlier than many other blazing stars.  As the common and Latin names imply, the flowers are not densely arranged on the stalk and as the varietal Latin name implies, they tend to occur mostly on only one side of the stem.
Piedmont blazing star has never been offered commercially by members of FANN - the Florida Association of Native Nurseries, but it would be an excellent candidate given its salt tolerance and its typical blazing star aesthetics.  This would be an excellent candidate for beach dune restoration plantings and one can only hope that someone will offer it for those purposes someday in the future.
Posted by Hawthorn Hill at 4:22 PM