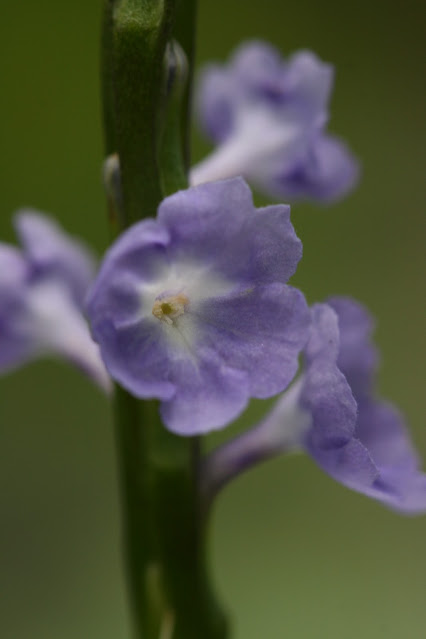 Blue porterweed (Stachytarpheta jamaicensis) is a perennial trailing wildflower native to much of the southern half of peninsular Florida, especially in the coastal counties. It also has been vouchered for Wakulla County in the Big Bend portion of the state and in Georgia. For a great many years, it was confused in the trade with an upright form that was sold here as a native plant, but has since been determined to be a Caribbean species (S. cayennensis). These 2 species are easily told apart by their growth form, however. While blue porterweed is a trailing plant that rarely stands taller than about 8 inches, S. cayannensis grows upright and can reach several feet in height.
Blue porterweed is primarily a coastal species and occurs most often in uplands and in disturbed sites in sunny exposed areas. It produces thick stems and coarsely toothed leaves with deep veins. Each leaf is ovate in shape and several inches long. Individual plants extend outward in all directions from the main stem and eventually cover an area several square feet wide. As such, it makes a good ground cover.
Flower stalks also are thickened and are produced at intervals along the stems. Small purple blooms are produced daily along their length. Each flower lasts only a day, but several are produced daily. Blooming occurs throughout the year during frost-free months. They attract the attention of various small butterflies and bees, making it a good plant for a pollinator garden.
Because of its growth form and pollinator value, blue porterweed is widely cultivated by commercial nurseries. It is sensitive to freezing temperatures, however, and suffers damage at these times. Temperatures below the mid-20's F, can kill it. Use this plant as a ground cover in areas that rarely see freezing temperatures and plant it where it will receive adequate sunlight and average to above-average drainage. It will die if planted in areas that remain wet for extended periods. It is easily propagated by cuttings or by the seed that is produced beneath the scales of the flower stalks.
Posted by Hawthorn Hill at 11:11 AM