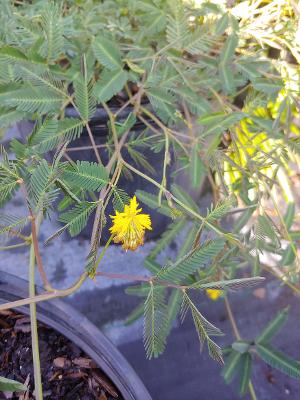 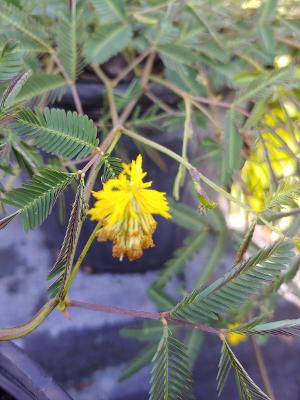 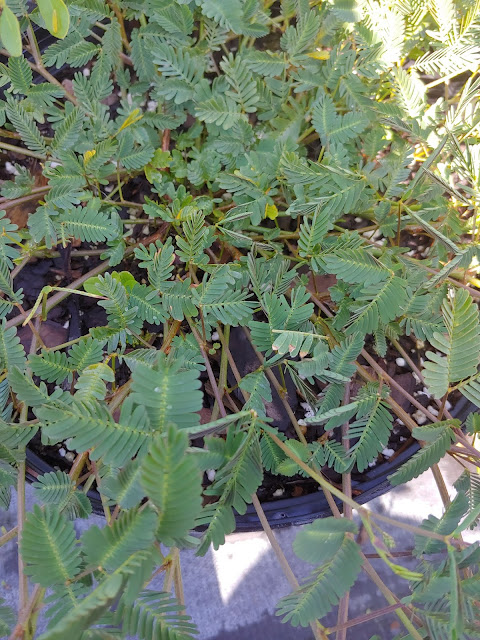 Tropical puff (Neptunia pubescens) is a bit of a misnomer as this wildflower is found throughout much of Florida and from Mississippi to Texas across the southern tier of the Southeast Coastal Plain. These photos were taken with my cell phone camera at a native plant nursery that I visited a few days ago. Normally, this species occurs in a wide variety of open sunny habitats including disturbed areas and at the edges of salt marshes.
Tropical puff is a perennial member of the legume family. It is evergreen in the more-tropical parts of its range and tardily deciduous in cooler climates. The foliage is said to produce good fall color in those locations. Like a few other widely used legumes, tropical puff grows as a creeping ground cover. Many stems arise from the main stem and spread out several feet away. These stems are not as dense as species such as sunshine mimosa (Mimosa strigillosa), however. The foliage is bipinnately compound. Each leaf is several inches long, but the leaflets are no more than 1/2 inch. As the Latin name implies, the leaves and stems are pubescent - covered by noticeable soft hairs. They also are touch sensitive and fold at night too.
Flowering occurs from late spring until fall. Small "powder puff" heads of bright yellow flowers are produced on stalks along the stems. The stalks are about 3 inches long and the flower heads are about 1/2 inch in diameter. These bright and showy flower heads are visually attractive and are of interest to small pollinators. The foliage serves as a host for Ceraunus blue butterflies and possibly other butterflies that  use a variety of legumes.
Despite its many attributes, this wildflower is rarely propagated commercially by members of FANN - the Florida Association of Native Nurseries. The plants photographed above were propagated by the owners of Sweetbay Nursery in Parrish, Florida from seed sent to them by a friend. One can only hope that it will gain wider cultivation in the future. As a legume, tropical puff fixes atmospheric nitrogen and incorporates it into soil. The seed  and foliage are widely consumed by wildlife and its growth form and salt tolerance make it an excellent ground cover in a wide variety of growing situations. Although I do not have personal experience growing this species, it is said to be easy from seed if scarified by nicking the seed tip and soaking it for about 8 hours prior to planting.
Posted by Hawthorn Hill at 10:22 AM