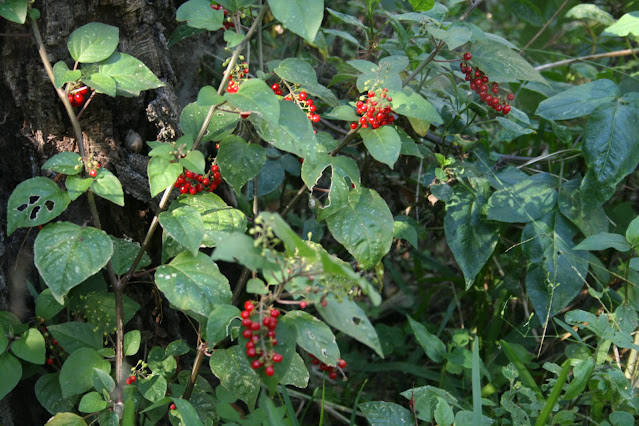 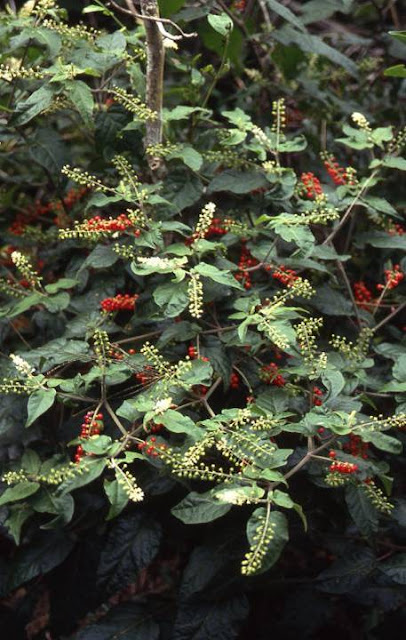 Rouge plant (Rivina humilis) is not a plant I typically would consider to be a "wildflower", but its display of blooms and the resulting fruit lend itself to putting it in this blog. It occurs in the partial shade of wooded understories in moist to average soil throughout peninsular Florida. It also is found in the Deep South from Louisiana and Arkansas to Arizona. It has not been vouchered from Georgia, Alabama or Mississippi.
Rouge plant is a semi-woody evergreen small shrub that can reach a mature height of 5-6 feet, but often is several feet less.  The leaves are ovate in shape with no teeth (entire) along the leaf margins. Each is several inches long and quite thin.
Flowering can occur throughout the year in frost-free months. Many racemes are produced from the tops of the stems. The individual flowers vary in color from pinkish to white. Though tiny in size, they attract the attention of various pollinators, including the zebra longwing butterfly. Pollinated flowers give way several weeks later to bright red round fruit, each about 1/4 inch in diameter. These are prized by fruit-eating songbirds such as mockingbirds. It's the bright red color of these fruit that give this plant some of its common names. The "rouge plant" name stems from the fact that they have also been used as a dye and as a rouge.
Rouge plant has a great many attributes that lend it to be a good landscape plant for native-plant gardeners. It is widely propagated because of that. Though it is a shade-loving species, it requires a few hours of good sunlight to prosper. Plant it at the edge of a shady location  and let it expand where it wants to. It reseeds rapidly and birds will also help plant it away from your original plantings. I like to use it mixed with other good wildlife plants such as the various native wild coffees (Psychotria spp.). If you add it, however, be prepared to have it spread and to weed it where it is not wanted.
Posted by Hawthorn Hill at 11:43 AM