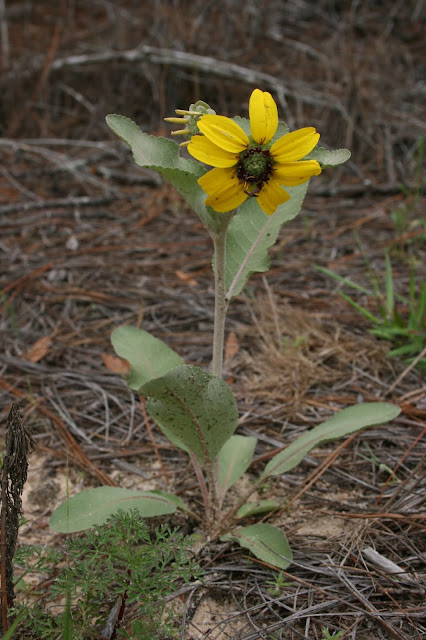 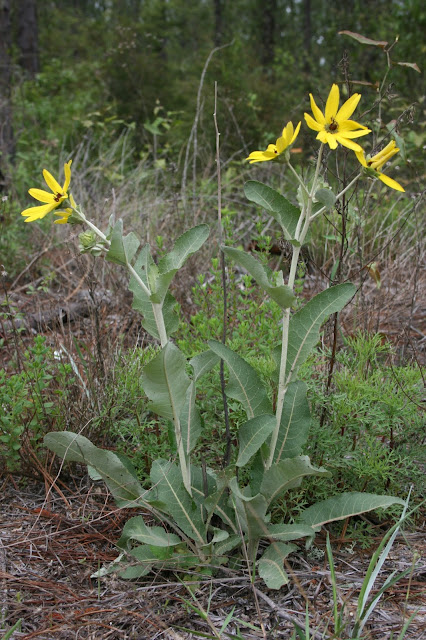 Soft greeneyes (Berlandiera pumila) is a perennial wildflower native to well-drained sandy soils in north Florida to the latitude of Levy and Volusia Counties. It also is found across most of the Southeastern Coastal Plain from Texas to North Carolina.  Throughout this range, it is typically found in sandhills and xeric pinelands. It does not persist in areas that remain wet for any period of time.
Unlike its close cousin (B. subacaulis), soft green eyes forms a tall flower stalk prior to bloom time, though its basal foliage is quite similar. These leaves are blue-gray in color, bluntly toothed, and with a noticeable midvein. Each leaf is about 4 inches long and several inches wide. The leaves die to the ground by early winter and reemerge in early spring.
Soft greeneyes has a decided blooming season from March until early July. The flower stalks rise well above the basal leaves, reaching a mature height of  2 - 2 1/2 feet.  Multiple flowers are produced at the tops of each stalk. The bright yellow ray petals  surround a center of reddish disc flowers. Each bloom is several inches across and fragrant - exuding a scent somewhat reminiscent of chocolate. Like other members of the Asteraceae, the flowers attract the attention of a great many pollinators.
Soft greeneyes is a beautiful wildflower that has only rarely been propagated commercially in Florida. I have tried it in central Florida, but found it to be difficult this far outside its natural range. I wish others, in north Florida, would take it up. This species requires well-drained sands and full sun to prosper. It grows easily from ripe seed collected from the brown flower heads. Sow it shallowly in a flat of well-drained potting soil and transplant the seedlings before they get too large.
Posted by Hawthorn Hill at 5:44 AM