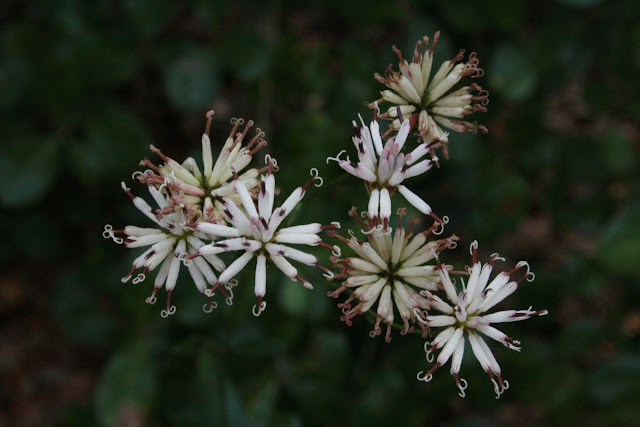 Feay's palafox (Palafoxia feayi) is endemic to Florida; found only in the southern two-thirds of the peninsula and only in well-drained sandy uplands in full sun.  In these conditions, it is often quite abundant.  Just don't look for it in plant communities which are not scrub or sandhill.
Palafoxias are deciduous perennials and feay's eventually becomes the taller and lankier of the two native species found in Florida.  Emerging in the spring, it quickly produces a wand-like stalk which often reach heights of 6 feet or more.  These stalks become almost woody in nature; a trait which helps keep them stiffly upright instead of flopping over.
This is not much of a foliage plant.  The simple oval leaves are broadest near the ground and become linear along the stalks.  They are rough to the touch.  Flower buds are produced at the ends of the stems and side stems by late summer and flowering typically occurs in early fall.
Feay's palafox has interesting flowers.  They are not as beautiful as some, in my opinion, but attractive in their own right - especially when used in small masses and mixed with other tall species in the right setting.  As a member of the aster family, it produces heads of flowers; but with no ray flowers and all tubular disc ones.  These are white in color, often flushed with rose.  The sharply contrasting maroon styles and curving white stigmas of the female flower parts add greatly to flowers' interest.  These flowers are also of great interest to butterflies and bees.
Feay's palafox can look weedy if used incorrectly and quite attractive in other settings.  Because of its size, it is not a good choice for small gardens.  In expansive planting beds, however, it can be effectively used in small groupings mixed with other tall species - such as some of the blazing stars (Liatris spp.), rosinweeds (Silphium spp.) and sky-blue salvia (Salvia azurea), as well as large grasses - such as lop-sided indiangrass (Sorghastrum secundum) and splitbeard bluestem (Andropogon ternarius).  Individual plants produce multiple stems from their base over time, so it is not necessary, or even advisable, to plant more than a couple of individuals to start with.  Space each at least 18 inches apart.  If you wish to add this species, make sure you have excellent drainage and plenty of sun.
Feay's palafox is often grown and sold commercially in Florida, but only by a small number of commercial native plant nurseries.  It is easy to grow from seed too, if you have access to plants and the permission of the landowner.  We do not grow it at Hawthorn Hill, but we do maintain its close cousin - coastalplain palafox (P. integrifolia).
Posted by Hawthorn Hill at 6:05 AM