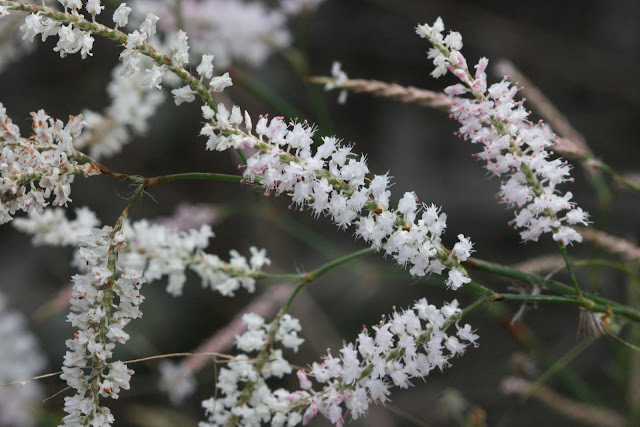 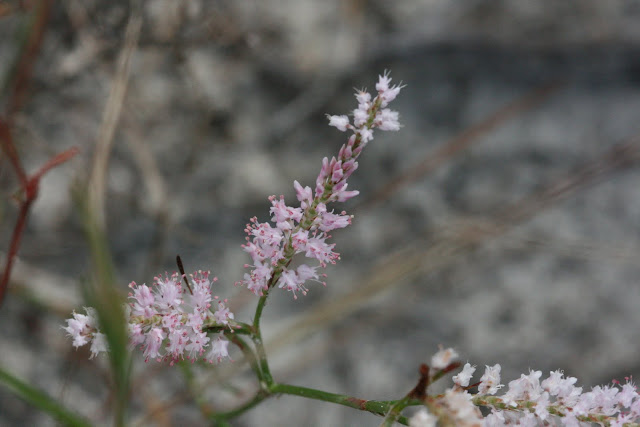 I learned this wonderful wildflower as "October flower", but that common name seems more applied to its close relative (Polygonella polygama).  In truth, this common name applies well to both as they are in full bloom at that time.  Sandhill wireweed (P. robusta) is defintitely a member of the sandhill community, but is common to a variety of upland sites with well-drained sands and plenty of sunshine.  It is found throughout much of Florida, but is yet another one of our endemic species - found nowhere else.
Sandhill wireweed is mostly deciduous, but generally maintains a rosette of basal foliage through the winter.  Its leaves are rather stiff and the stems are covered by short stiff hairs.  By spring, it begins extending its many stems in all directions.  These do not go straight up, but sideways; eventually reaching about 1-2 feet above the ground.  The stems are multi-branched as well, so a mature specimen eventually produces a somewhat tangled mass of relatively stiff stems with few leaves.  This species is not the most attractive foliage plant you might decide to use in a home landscape, but it makes up for this when it blooms.
Like other members of the buckwheat family, sandhill wireweed produces an abundance of flowers that are surrounded by papery bracts.  But, unlike most others, these come in a variety of shades from light pink to deep rose - and the colors change as the flowers mature and age, eventually becoming rusty orange.  The flowers are produced at the ends of each stem and a fully mature specimen is covered by flowers for 2-3 weeks in October.  The flowers are of most interest to bees and similar pollinators, but skippers and other small butterflies may use them as well.  The seeds are important to seed-eating birds, like doves.
Sandhill wireweed is often visible in fall growing in the open sands along roadsides and it is adaptable to most landscape settings if given suitable drainage, good sunlight, and open space between its neighbors.  Do not crowd this species or it will fade away.  If you can give it these conditions, it makes a wonderful addition to a sandhill/scrub planting.  Use it in the middle section of the planting and combine it with other medium-tall fall-blooming species, such as grassleaf goldenaster (Pityopsis graminifolia) and wild petunia (Ruellia caroliniensis).
Sandhill wireweed is only rarely offered by commercial nurseries, but is relatively easy to grow from seed collected along the roadside in early winter.  We do not currently propagate it at Hawthorn Hill, though my wife, Alexa, and I admire it greatly.
Posted by Hawthorn Hill at 5:29 AM