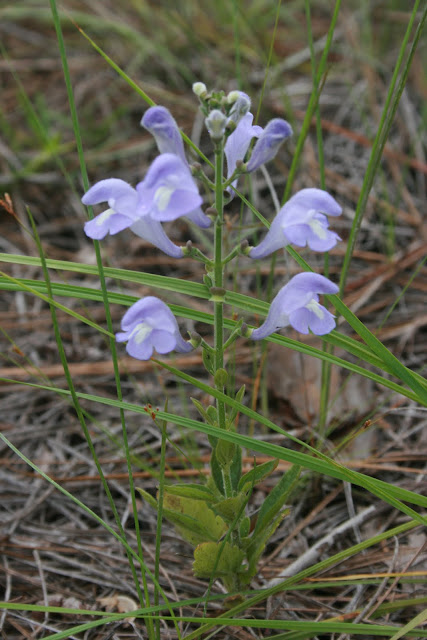 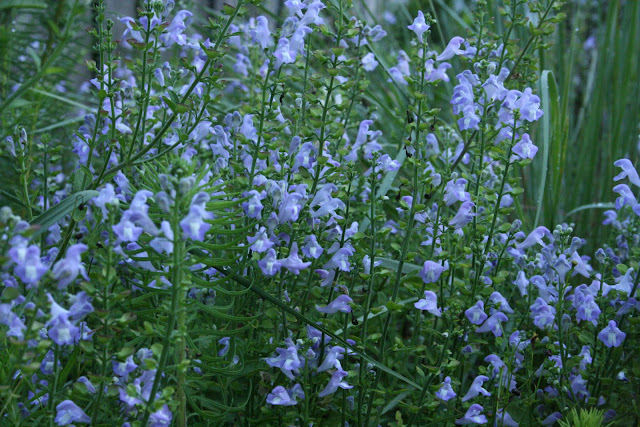 Helmet skullcap (Scutellaria integrifolia) is the most widespread and common member of this mint family genus.  It is found statewide in Florida except for the most southern tier of counties, and throughout much of the eastern half of the U.S.  This is a plant of well-drained open habitats and can occur in a variety of communities including sandhill, flatwoods and open dry woodlands and fields.
Helmet skullcap is a deciduous perennial which dies back to the ground in winter and re-emerges again in early spring.  It begins as a basal rosette of arrow-shaped leaves, but soon produces its upright stalk with opposite, mostly elliptical, leaves.  Leaf shape can be somewhat variable in this species, however, and sometimes the leaves remain arrow-shaped at least halfway up the stem.  Mature stems reach a height of about 2 - 2 1/2 feet before the flowers appear in early summer.
Skullcap flowers are similar between species and helmet skullcap is typical of the genus.  Each flower is about 1/2 inch long and a soft sky blue in color.  The fused petals form a hood above the lower lip while the lip itself has a distinct white spot.  Blooming occurs over a few weeks in June or July and, for that time, the plant is awash in color.  Skullcap flowers, like most mints, are pollinated by bees and only sporadically visited by butterflies.  Once flowering is complete, the wafer-like seed capsules ripen along the stems.
Like many mints, helmet skullcap produces large numbers of seed and these are likely to germinate in large numbers too - eventually leading to a great number of seedlings.  This is wonderful in settings where these plants are welcome, but a constant source of thinning for places where more order is desired.  Seedlings are very easy to remove, however, so weeding them from unwanted areas is not much of a challenge.  And, they can be potted up and given to friends if so desired.
We have grown helmet skullcap at Hawthorn Hill for a number of years and look forward to its show of color each summer.  Because few other of our wildflowers are blooming that early, it is especially welcome.  Use it in the front half of a mixed wildflower garden as it doesn't stand too tall and mix it with other medium-tall species such as wild petunia (Ruellia caroliniensis), twinflower (Dyschoriste oblongifolia), and black-eyed susan (Rudbeckia hirta).  If you wish to limit its production of seed, prune it back sharply right after it blooms.
Although few of our native skullcaps are commercially propagated, helmet skullcap can be found without too much effort.  It is also available from commercial seed sources.  Once you have it established, it should thrive and spread without much additional care.
Posted by Hawthorn Hill at 10:06 AM